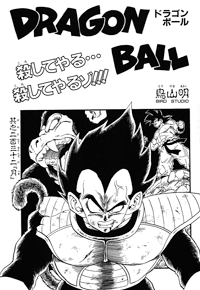 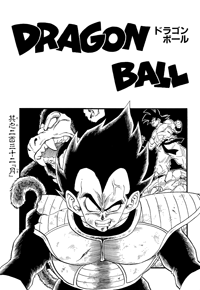 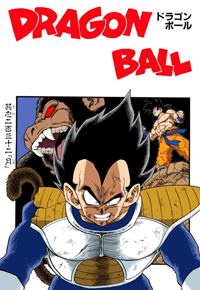 Goku is really worn down, and Yajirobe is glad it’s over, and runs over to Goku. “Son!!! You did it, didn’t ya, you bastard!!!” Goku wonders what he’s doing here, and Yajirobe compliments him on beating that other bastard. He pats Goku on the back, which Goku finds extremely painful. Yajirobe asks what’s wrong, and Goku explains that he used a technique that was too much for his body. Goku then tells Yajirobe he should run away, and Yajirobe wonders if he doesn’t mean… Goku says Vegeta’s still alive, and also says, “I think I’ve already reached my limits.” Yajirobe then takes this opportunity to run away.

The Kamehameha is still shooting Vegeta up through the sky, but Vegeta finally breaks away from it. “Shiiiiiiiiiiiiiit!!!!” Vegeta goes insane at the fact that Kakarrot overpowered him. He’s supposed to be the No. 1 Saiyan. Vegeta then calms down and decides that despite how ugly he’ll become, he’ll transform into an Ōzaru, which brings out the true strength in a Saiyan. Vegeta then looks around for the moon, but can’t find it, and thinks it must not be time for it yet.

Kaiō laughs about how he can’t find the moon, as that guy named Piccolo destroyed it. Kaiō also tells Goku telepathically that even though he has no strength left, he can still use the Genki-Dama. And Goku wonders why Vegeta hasn’t come back yet. Meanwhile, Vegeta thinks they must have already destroyed the moon, but he doesn’t seem to be concerned at all… Goku then feels Vegeta returning to the battlefield. Vegeta tells him that he notices the moon is gone, and Goku doesn’t see what that has to do with anything.

“Sorry for the delay, Kakarrot!!! At last, your time to die has arrived…!!! After all, a low class warrior shouldn’t challenge a super elite warrior to a fight!!! Fuhahahaha…” Goku doesn’t quite understand what’s going on as Vegeta tosses the Power Ball way up into the air and yells at it to blend in. It begins to expand, and even Kaiō freaks out. Vegeta stares up at it, and then begins to transform… 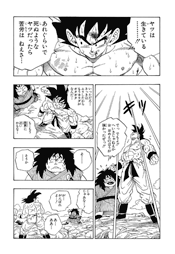 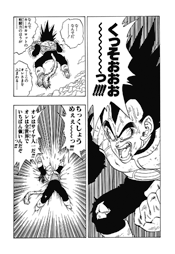 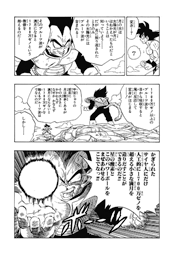