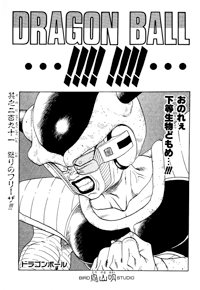 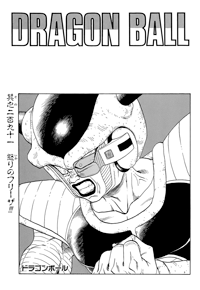 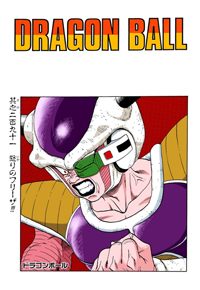 Kuririn thinks these guys’ civilization is far more advanced than Earth’s, as Vegeta throws them some undersuits to wear. Kuririn says this Freeza person must be really strong if Vegeta needs their help, and Gohan says he’s scared. Finally, Vegeta gets them some battle jackets; small-sized ones of course. Kuririn and Gohan aren’t sure how to get the battle jackets over their heads. Vegeta says it’s very stretchy and will expand, like when he was an Oozaru on Earth. But it’s still quite strong against shock. Kuririn asks if the gloves and boots are made of the same material, and Vegeta supposes so. Kuririn is amazed at how light everything feels, and asks Vegeta if his shoulder-less battle jacket doesn’t allow better movement. Gohan says they can still move freely, as Vegeta explains that he’s wearing an old-type, which was the only one left in his size. Kuririn asks how long it will be until Goku is healed, and Vegeta says about 40-50 minutes. Kuririn tells Gohan to wait here while he goes to ask the Eldest for the password to summon Shenlong. Gohan agrees, and Kuririn flies off toward the Eldest’s house.

Meanwhile, Nail is quite exhausted, while Freeza looks the same as always. Freeza says that even without the use of his left hand, there’s still no way he can win, and thinks Nail should start talking. Nail then lets off a huge blast at Freeza, but when the smoke clears, Freeza is completely undamaged. Freeza can’t understand why he would keep fighting even though he knows he’ll lose, and suddenly appears in front of Nail and punches him in the face, knocking him to the ground. Freeza says to tell him how to get a wish granted, and Nail says there’s no point in him knowing now. Nail explains that Dende has probably reached the Earthlings by now, and told them password. Freeza remembers passing Dende, and realizes Nail has just been buying them time. Freeza flies off, pissed, and checks his scouter. He doesn’t get any readings for the Ginyu Special-Squad at all, and can’t believe that Vegeta and the Earthlings could’ve beaten them. Freeza yells that he should be the one to have his wish granted, not those lowlifes.

Dende is also flying along, and remembers that the Eldest said they were in the Maima District. The Eldest, meanwhile, thinks of how the Earthlings must learn the password quickly, and of the hard time Nail has been put through. He hopes Dende hurries, as his life is nearing its end. Elsewhere, Kuririn is flying along when he feels another ki flying nearby. He flies over and notices it’s Dende, and calls out to him. The two of them are very glad to see each other. 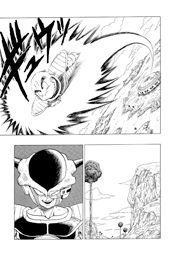 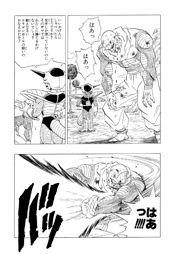 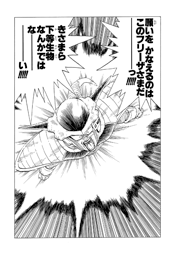