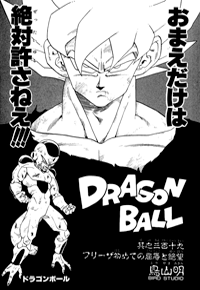 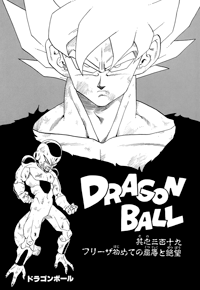 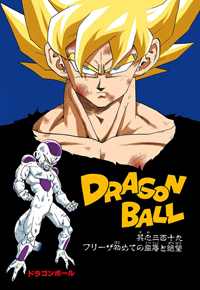 Freeza can’t believe this, as Goku flies over and elbows him in the face. Freeza stops, but Goku uppercuts him, then follows up with a head-butt to the face. Freeza tries kicking and punching at Goku, but Goku blocks them all. Freeza backs off, then tries shooting a finger blast at Goku, but he dodges it, and Freeza can’t believe it. He shoots a whole bunch more, but Goku dodges them all. Freeza gets pissed and says if only one of them would hit… Goku says he’ll let one hit him, and Freeza gets pissed that he’s being mocked. Freeza says, “You’ll regret this!!!!”, as he shoots another one. Goku takes a direct hit to the chin, and his head is knocked back. But then he leans forward, smirks, and says, “Even if you can destroy a planet, it seems now you can’t even destroy a single person…” Freeza stutters, “W-who are you…”

“Don’t you already know?! I’m a Saiyan who came from Earth to defeat you. A warrior of legend that has been awakened by anger, but possessing a calm heart. I am the Super Saiyan, Son Goku!!!!!”

Freeza is shocked, but then calms down and realizes he really must be a Super Saiyan. He notes the “awakened by anger, but possessing a calm heart” part, and says that must be why Vegeta never could do it. Freeza then screams “Dammit!!!!!”, and thinks how unbelievable this all is. That he, Freeza, could be beaten by a Saiyan. Meanwhile, Gohan reaches Goku’s spaceship, and lays Piccolo inside before setting off to find Bulma. Back on the battlefield, Goku starts up a Kamehameha, as Freeza says he would rather kill himself than be killed by him. Goku says to do as he likes. “But, I won’t die. The one to die will be you. I can survive in outer space, but what about you Saiyan?!” Freeza creates an energy ball and launches it down at the planet as he yells, “I’ll exterminate this planet!!!!” 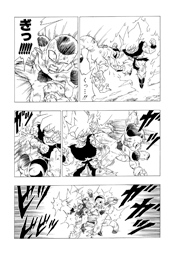 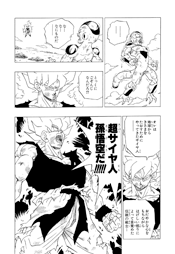 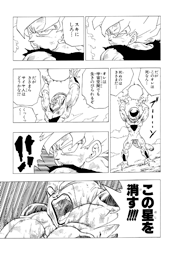