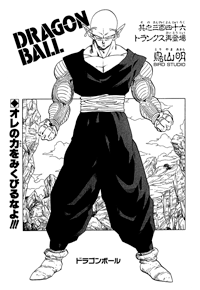 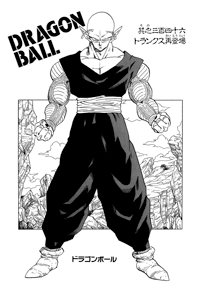 “Gohan, Tenshinhan, Piccolo, or Kuririn?” No. 20 wonders which one’s energy to take, and figures that Piccolo should be the strongest after Vegeta. Piccolo is mid-air, looking around, and No. 20 then grabs him from behind, and puts a hand over Piccolo’s mouth. No. 20 says now he can’t call his friends, but he knows where they are, so they won’t find him. However, Piccolo telepathically calls to Gohan. Gohan frantically searches for Piccolo’s location, and then feels a faint ki and flies off toward it. No. 20 tells Piccolo he only has a bit of energy left, and says he’ll die at this rate. But then Gohan whacks No. 20 off of Piccolo, and the others feel this. No. 20 can’t believe Gohan found him, and then notices that Vegeta, Kuririn, and Tenshinhan are all here now too. Gohan tells Kuririn to toss Piccolo a senzu, and Kuririn does so. Piccolo eats it, lands, and tosses off his turban and mantle.

Piccolo tells Vegeta to leave No. 20 to him, and don’t help at all. Vegeta says just don’t give him anymore energy. No. 20 thinks if he absorbs his energy once more, then Vegeta… His train of thought is interrupted by a knee to the face from Piccolo. No. 20 gets pissed and flies at him again, but Piccolo just elbows him down into the rocks. No. 20 can’t believe this, Piccolo shouldn’t be able to beat him, especially after having increased his energy. Elsewhere… Trunks is back, floating over the city the artificial humans had appeared in. Noticing some of the destruction, he thinks he’s too late, Goku and everyone are gone. But the time machine only has enough energy to return home. But then he feels a ki; a fighting ki. They’re just fighting in another location. So he flies off toward them. Piccolo kicks No. 20 in the face, and Kuririn is really impressed with his training.

Bulma is flying an air car, with Yajirobe (holding baby Trunks) in the passenger’s seat. She says she’s going to the place where there was that big explosion. Yajirobe says there’s no need, and they should just go home. Goku and everyone can handle it, and the brat’s here, after all. Trunks flies past their car, and Bulma recognizes him as the kid from the future. He’s probably going to the fight, so she wants to follow him. But Trunks notices something and lands. Meanwhile, Piccolo chops off one of No. 20’s hands, and then gives him a little speech. Gohan thinks Piccolo has won. Elsewhere, Trunks is at the spot of the previous battle, and he spots No. 19’s head. “What… This artificial human… What in the world has everyone been fighting…!?” 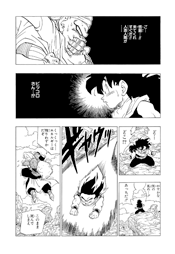 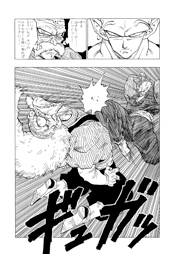 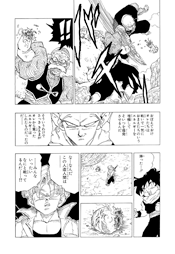