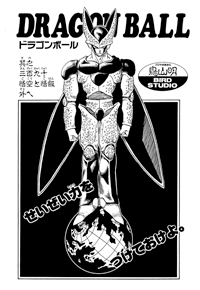 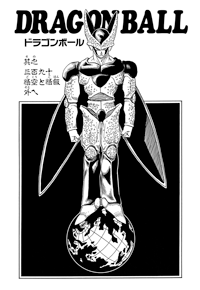 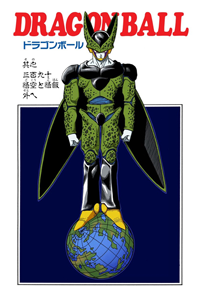 Goku and Gohan Come Out

Panic has spread throughout the world since Cell’s broadcast. But up at God’s Palace, Vegeta and Trunks, wearing new battle wear, are waiting outside the Room of Spirit and Time. Trunks asks how much longer Goku and Gohan will be, and Popo says it won’t be a full day for another three hours. Vegeta says they’ve been in there long enough. Piccolo says there’s nothing to worry about, there’s still nine days until the day of the fight. He thinks they should rest while he goes in. Vegeta thinks that’s a waste of time, and he should use the remaining eight days for himself. Piccolo tells him a person can’t spend more than two days, or forty-eight hours of their life in the Room of Spirit and Time. Vegeta asks why, and Popo says the exit will disappear and you can never leave. Vegeta is pissed, but Trunks cheerfully tells him they still have more than twenty hours.

Then everyone feels Goku and Gohan’s ki, as they’re coming out already. Both of them are Super Saiyans. Goku wonders why Vegeta and Trunks are here, and feels Cell’s ki, so he must still be alive. Piccolo thinks to himself that he barely recognizes Gohan. Vegeta wonders if they’re really Super Saiyans, but thinks their aura is a bit different. They’re very natural in that form. So, Trunks explains everything that’s happened to Goku and Gohan. Goku thinks a tournament sounds interesting, and asks Mister Popo if he still has his dōgi. Trunks says his mom could make him another outfit as Goku changes into his usual orange and blue outfit, but Goku says he likes this, and he wants to fight as an Earthling. Gohan asks Piccolo if he can have some new clothes, just like his, and Piccolo smirks and says he’ll give him something cool. He gives Gohan an outfit a lot like the one he had fighting the Saiyans, except with a mantle like Piccolo’s.

Vegeta asks Kakarrot if he thinks he can defeat Cell. Goku doesn’t know since he hasn’t even met Cell in his perfect form yet. So, he’ll go see right now. Goku teleports away, right into the middle of Cell’s ring where Cell is standing. Cell says this is the ring for the Cell Games that will decide the fate of the world in nine days, and asks Son Goku what he thinks. Goku says it’s a pretty crappy ring for deciding the fate of the world. Goku gets serious, and says this is his perfect form. He says he’ll definitely show up to fight, but tells Cell not to kill anyone else. Then he leaves, saying it’ll be a good match. Cell says this will be a much more interesting event than he thought.

When Goku returns, Trunks asks how was he. “Honestly, I didn’t think he was that awesome. With that frame of mind, I don’t really have any idea how strong he’s gotten. I won’t know until I try, but, well, as it stands, I probably can’t win.” Piccolo tells him he can use the Room of Spirit and Time once more. The current order is: him (Piccolo), Vegeta, Trunks, and then they can go. Tenshinhan apologizes and says he’ll have to pass, he doubts he could put up much of a fight against Cell. Goku declines though, saying he and Gohan have done enough, they’ll train here in the outer world, doing what they can with the next nine days. Piccolo is shocked he would say that. 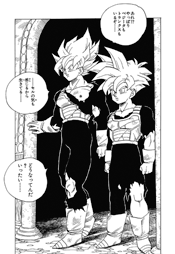 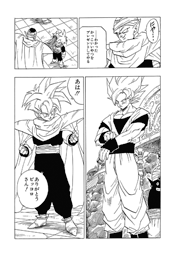 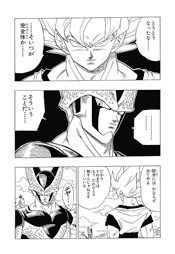