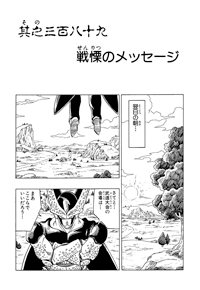 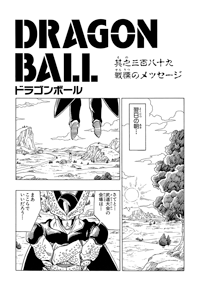 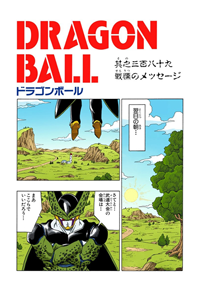 The next morning, Cell decides he’ll make a ring for the tournament. It’s a mostly empty place, except for a couple houses, but Cell blows those up, and makes a big portion of the land completely smooth and flat. Then Cell telekinetically lifts up a huge mountain, and cuts it up until it’s a perfectly smooth cube. Then, still telekinetically, he slices the cube into tiles, then sends them all to the smoothed out area on the ground. Now he’s off to a TV station. At Kame House, Kuririn and Yamcha are watching the weather, when the guy on TV suddenly starts screaming. Kuririn tells Muten Roshi that Cell is on the TV, and he and Chi-Chi come over to watch too. A crew guy yells into the camera to call security or the police, but then Cell kills him.

“I will be interrupting your television for just a little while. Actually, I’ve brought splendid news for those who enjoy living in peace. News that should give your days even more joy and thrills. My name is Cell. I think you all know of the situation many days ago where numerous humans vanished at the hands of a monster. That monster has evolved and transformed into me. Thank you for giving me lots of bio energy back then. But it’s alright, as I no longer need bio energy. Anyway, the splendid news is: nine days from today, M 17th, at noon, a martial arts tournament called the ‘Cell Games’ will take place. The place is northwest of Central City, 28 KS Point 5. I’ve built a ring there.” Tenshinhan, Piccolo, and Mister Popo are watching from God’s Palace, on a little TV with a satellite hookup. “It’s different from the Tenka’ichi Budōkai. The opponent you humans will fight will be me alone. There can be as many of you as you want.”

“The way it works is, one of your competitors fights me, and when they lose, the next competitor takes their place. Thus, it would be an advantage for you to have greater numbers. Maybe I’ll get tired if I have lots of matches. The rules are mostly the same as the Tenka’ichi Budōkai. Giving up, or any part of the body going outside the ring, is a loss. And, while I’ll try not to, if you’re killed, that’s a loss too. Should all the competitors lose, I’ll kill every single person in the world. I’ll thoroughly make sure to not leave a single one, while taking a good look at the expression of fear in their faces.” Vegeta, Trunks, Bulma, and Dr. Brief are watching from a lab where No. 16 is being repaired. “With that being the case, I want those with confidence in their strength to participate.” Then Cell puts his hand against the wall behind him, and blows it up completely. Then he flies out of the building through the hole he made.

At Kame House, Kame-Sen’nin thinks he’s incredible, while Kuririn thinks of what he said about killing everyone in the world. Yamcha wonders who could possibly stand up to him. Vegeta and Trunks couldn’t, not even Goku could. At Capsule Corp., Vegeta is taking off his shirt, and Bulma asks where he’s going. He says he’s going back to the strange room, of course. Vegeta says he doesn’t know about Earthlings dying, but he won’t be satisfied if he doesn’t kill Cell. Trunks says he’ll go too, and Bulma says she’ll give him a haircut before he goes. “Cell’s speech has now created tremendous fear throughout the world. Once again, the world has been weakened by peace, and the army and the police don’t know what to do about the enemy that has appeared before their eyes. The people have forgotten about the small boy that fought Piccolo Daimaō long ago. And the people didn’t know about the warrior who fought the Saiyans or Freeza. About Son Goku’s existence.” 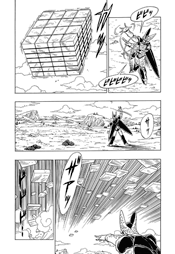 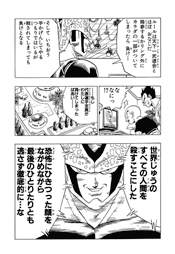 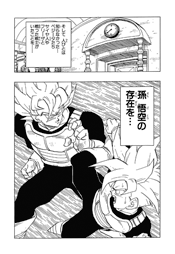