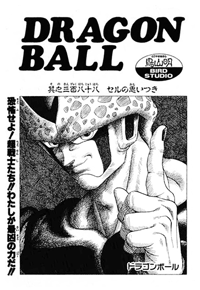 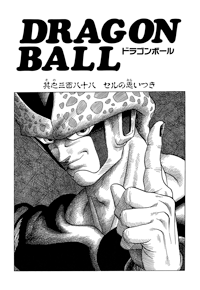 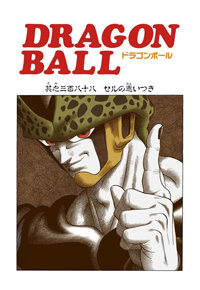 Cell says nothing comes of this transformation, and calls him stupid. Trunks realizes that’s why his dad didn’t dare use this transformation. Then he lands, saying he’s an idiot, as Cell said. He powers down, and tells Cell to go ahead and kill him. Cell says okay, and holds out his hand. Meanwhile, Kuririn has landed on another island with Vegeta, and says Trunks’ ki has gotten smaller, while Cell’s is still huge. Kuririn gets worried, and wakes up Vegeta and feeds him a senzu. Cell tells Trunks that both he and Vegeta have disappointed him, and he’d hoped it would be more fun. At God’s Palace, Bulma wonders if Trunks is still winning. Piccolo says perfect form Cell is amazing, and that Trunks will be killed.

Cell has a final question. He and Vegeta suddenly powered up greatly in a short time. Cell wants to know how. Trunks says nothing, so Cell changes the question. “If you had the time, could you go up even more?” Trunks says he won’t know unless he tries, and asks Cell why he wants to know. Cell says he has another question. “What is Son Goku doing? Why isn’t he here?” Trunks says Goku is currently training to defeat him, and he’ll appear to fight tomorrow. Cell likes that answer, and says he’ll hold a martial arts tournament in ten days, a great service to them all. He wants them to get stronger and make it fun. He explains to Trunks that there used to be martial arts tournaments called the Tenka’ichi Budōkai, and he’s going to revive that.

“However, your only opponent will be me. They’ll be one-on-one fights, and if I win, the next person steps up to fight me. You can have as many people as you want. If your numbers are higher, that will just be an advantage. You should gather as many as possible. When I know the location, I’ll inform you. By television broadcast or something.” Then Cell prepares to leave, saying to be sure to bring lots of senzu, and Trunks demands to know what his true purpose is. Cell says he pretty much just wants to test his own strength, and he has no interest in taking over the world or anything. Nor does he have much interest in killing Son Goku, the reason he was created. His greatest purpose is to see the look of terror on human’s faces. Trunks freaks out, and Cell says that’s the look, then flies off. Trunks stands there speechless, until Kuririn and Vegeta arrive on the island and ask what happened.

Bulma tells the two of them to stop just standing there and go help, or Trunks will die. Piccolo says it’s okay, he hasn’t been killed. Then he thinks he’ll have to enter the Room of Spirit and Time next. Meanwhile, Trunks has explained everything, and Vegeta is pissed Cell is using them to play around. Trunks thinks they can maybe do it if they all enter the Room of Spirit and Time again. Vegeta says there’s no need for him or Goku, only he needs one more day in there. No. 16 limps over to them, saying he’ll enter the tournament too. He asks if someone will please take him to Capsule Corporation to be repaired. Trunks says no way, but Kuririn says he’ll take him. He tells Trunks not to worry, since he doesn’t seem to be a bad guy. The two that got sucked up by Cell weren’t so bad either. They’re much different from the future artificial humans that Trunks knows, and this is a time when it’s good to have lots of strong allies. “The next day, there was a television broadcast that aired throughout the entire world. Everyone on Earth was certainly overcome with fear…” 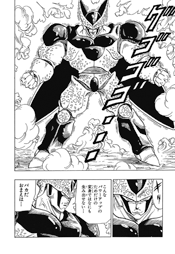 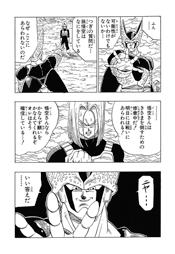 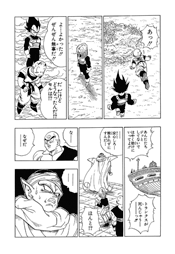