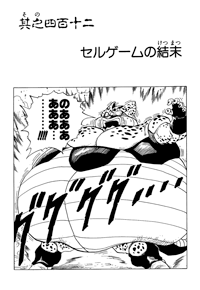 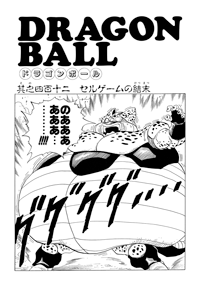 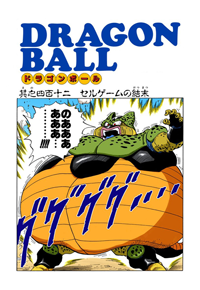 The End of the Cell Game

Everyone wonders what’s going on, and Goku realizes this is bad. Cell laughs, and says he’s going to blow himself up in one minute. He’ll die, but so will all of them, and the Earth. Cell tells Gohan there’s nothing he can do to stop it, and Gohan prepares to attack him. But Cell says to go ahead, since attacking him will just make him explode right now. Cell bloats up even more, and says there’s thirty seconds now. Gohan freaks out, as does everyone else. Piccolo says there’s nothing more they can do. Cell says there’s twenty seconds. Gohan remembers about how Goku had warned him to kill Cell right away, and he realizes it was just as his father had said. Gohan slams the ground with his fists, saying it’s all his fault. If only he’d finished Cell sooner… Trunks thinks there’s ten seconds now, and Piccolo says the Earth will soon be gone. Cell just laughs.

Goku gets a serious expression on his face, looks at the others, and smiles. “Well, it’s occurred to me that this is the only way to save the Earth. Bye-bye everyone…” Goku teleports away and Kuririn hopes he doesn’t mean… Cell says there’s only four seconds now, and laughs about being satisfied to see the look of pain on Gohan’s face. Goku reappears right next to Cell, and puts his hand on Cell’s huge belly. “You’ve done well up until now, Gohan. You were awesome! Tell your mom I said I’m sorry.” Then Goku teleports away with Cell. Gohan, Kuririn, Vegeta, Piccolo, Trunks, Yamcha, and Tenshinhan all look on with various expressions. And then Kaiō has a very shocked expression. Goku and Cell have appeared on his planet. “Sorry, Kaiō. I didn’t know where else but here.” But then Cell suddenly explodes. The others on Earth are worried, and Piccolo says Goku’s ki has vanished. 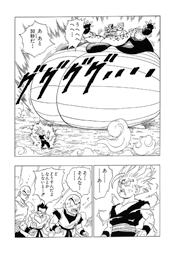 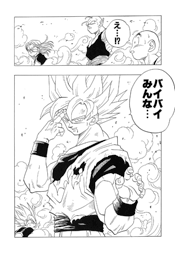 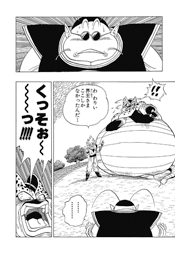