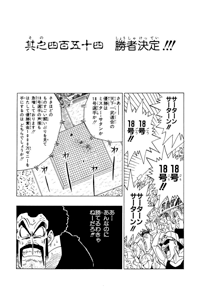 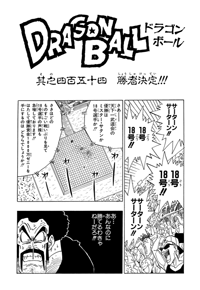 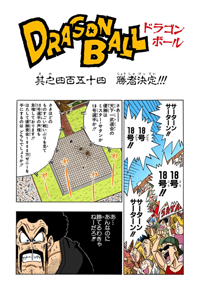 The Winner is Decided!!!

The crowd is chanting “SATAN” and “EIGHTEEN”, as the announcer goes on about them being the final two contestants, but Satan is quite worried. Chi-Chi tells the little blonde girl that her mommy is gonna win 10,000,000 zenny. Kame-Sen’nin gets excited, but Yamcha says, “This is no time for laughing, Muten Rōshi. We have no idea what’s happening with Goku and the others…” Meanwhile, Trunks and Goten throw off the remainder of their Mighty Mask outfit, mid-air over the ocean, as they notice Videl flying along. Goten calls out to her, and she notices him too. Back at the Budōkai grounds, Satan freaks out as No. 18 starts to come at him. She puts him in a headlock, and he squirms and screams. She tells him to shut up, and then asks if he wants to win.

No. 18 says she’ll let him win, if he gives her 20,000,000 zenny. Satan is shocked at that amount, but she asks if he’d rather be knocked out. Satan says he’ll pay, and then she jumps off of him as if she were knocked away. Satan starts giving a speech, telling her she has no chance, but she says to just hurry it up. So, Satan comes at her with a Satan Miracle Special Ultra Super Megaton Punch. His fist hits her face, but she doesn’t flinch at all, and asks if this is his sure-to-kill technique. He says yes, so she flies backwards and lands out of the ring. Mister Satan is declared the winner, and the crowd goes wild. No. 18 walks away, saying she’ll go to his house for the money tomorrow, and kill him if he doesn’t pay.

Videl has explained everything to Trunks and Goten, and they think an evil mage and a majin sounds awesome. Goten says everyone’s over that way, and Trunks agrees that he feels his Dad’s and the others’ ki there. Trunks says they’ll have to hurry before they beat up the enemy, and Goten freaks out and says he wants to see first. The two of them turn Super Saiyan and zoom off, leaving Videl in their dust. 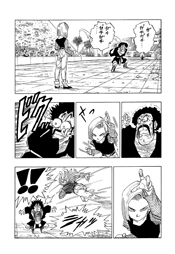 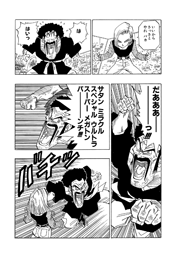 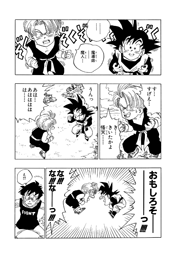