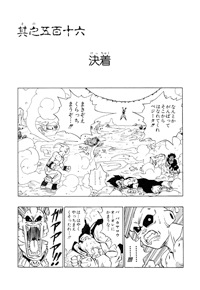 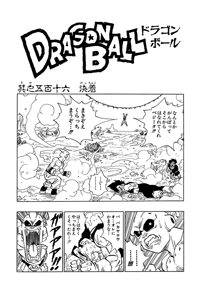 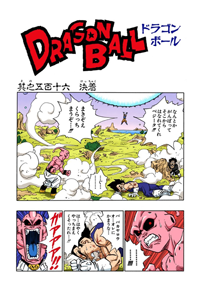 Goku tells Vegeta to move or else he’ll be caught up in it, but Vegeta says not to worry about him and just do it. Boo suddenly throws a blast at Goku, and Goku quickly vanishes from beneath the Genki-Dama to evade it. When he reappears, he notices Vegeta’s not near Boo anymore. Satan is running off with Vegeta slung over his shoulder. “You’ve done it, haven’t ya, Satan!!! You really are the world’s…” Boo prepares to attack Goku. “…Savior!!!!” Goku launches the Genki-Dama. “Drop dead, you bastard!!!!” Boo tries to counter the Genki-Dama with a Kamehameha, but it’s no use. However, Boo is barely able to hold the Genki-Dama off from smothering him. Goku tries pushing further, wishing he had just a bit more left in him.

Vegeta realizes Kakarrot doesn’t have enough physical strength to fully launch the Genki-Dama. Everyone on Namek, as well as Enma-daiō‘s company, all contributed their power to it and wish Goku their best. Dende asks Kaiōshin to please take him back to the Kaiōshin Realm to heal Goku, but Kaiōshin says he can’t teleport again yet because of his own lack of physical strength. Porunga is getting really impatient about the final wish, and Dende then gets the idea to ask Porunga to restore Son Goku’s strength. Porunga says this is very possible, and Dende informs Goku he’s made this wish.

Goku then feels his strength return, and thanks the Dragon Balls. He turns Super Saiyan, and says to Boo, “You’re awesome. You’ve really done your best… All by yourself… This time, be reborn as a good guy… I wanna fight you one-on-one… So I’ll be waiting… And I’ll increase my strength lots and lots… Later!” Goku pushes the Genki-Dama down, and finally, Boo is completely obliterated.

Goku drops his Super Saiyan state, and sighs with relief that it’s finally all over. Vegeta smirks and says, “Hmph… Took you long enough…” Goku grins, giving Vegeta a thumbs up.

Goku drops his Super Saiyan state, and sighs with relief that it’s finally all over. Vegeta smirks and says, “Phew… Took you long enough…” Goku grins, giving Vegeta a thumbs up. “What’s with that goofy look on his face… I seriously can’t stand you… Hmph…” 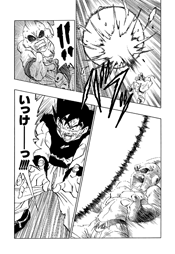 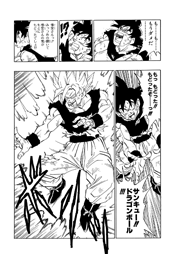 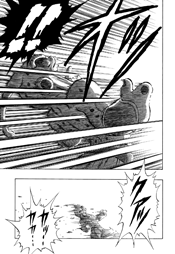