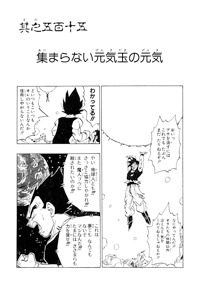 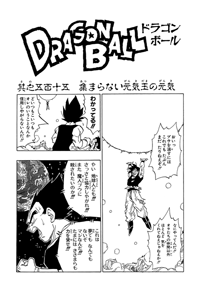 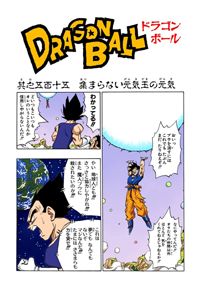 Energy Won’t Gather for the Genki-Dama

Goku says this isn’t going to be enough, and asks if anyone besides their friends have given their ki. Vegeta says the people don’t believe him, and begins yelling at everyone to contribute, in a very mean and threatening manner. One guy raises his hands, but after the draining effect, he says it’s a “devil’s trap” and warns everyone else not to do it. Meanwhile, the evil Boo is pounding on the good one, and Vegeta thinks they don’t have much time left, as the fatty’s on the brink of death. Boo is about to finish off the good one, and so Satan throws a rock at him. The evil Boo is slightly annoyed by the rock, and turns his head toward Satan. In facing that direction, he suddenly notices the Genki-Dama forming.

Vegeta tells Kakarrot to talk to the Earth idiots while he buys some more time. Vegeta appears in front of Boo, but he quickly punches Vegeta in the stomach very hard, and then grabs him by the hair and prepares for another attack. Goku starts calling out now. “Everyone on Earth!!! I’m beggin’ ya!!! Because I’m beggin’, lend your genki for me!!! Everyone’s help is needed!!! Raise your hands to the sky for me!!! Quickly…!!!” In the Karin Holy Land, an adult Upa tells his father about this voice. Bora, now with gray hair, knows that’s the voice of Son Goku, and he and his friends are fighting Majin Boo. Bora and Upa both raise their hands. Elsewhere, No. 17 raises a hand, saying it’s been a long time since he’s heard that voice. Hatchan and Sno, as well as the others in Jingle Village, recognize Son Goku as well, and all raise their hands.

Some other people think this new voice sounds more honest, but people still think it’s a trick. Boo hits Vegeta in the face, as Goku wonders why it’s still not growing more and why people still don’t understand. Vegeta swipes at Boo, misses, and then Boo delivers a hard shot to Vegeta’s face. Satan is watching all of this intently. Goku is getting desperate. “Hurry up and do this for me, everyone!!! Doesn’t it matter what happens to the Earth or the universe!? Dumbasses!!!” The people get angry and reluctant, and begin to wonder if the entire Majin Boo thing was even true to begin with. Satan is fed up of listening to all this, and yells at everyone to contribute. The people on Earth recognize his voice, and begin to wonder if Mister Satan is the one fighting Majin Boo. Satan says he is, and he needs to borrow their power. Then he somewhat apologizes to Goku for saying that, but at least it worked. Everyone on Earth raises their hands, as they chant “Satan”. Large balls of genki begin flying out into space, as Vegeta takes another hard kick from Boo. He’s a bloody mess, and Goku tells him to bare with it. Satan can’t believe it’s still not big enough, but then, suddenly, the Genki-Dama grows tremendously. Satan can’t believe it, and Goku tells Vegeta to get out of the way so he can launch it. 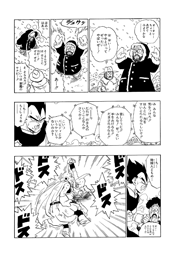 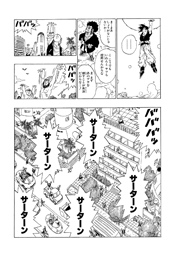 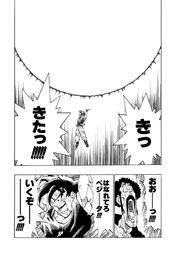