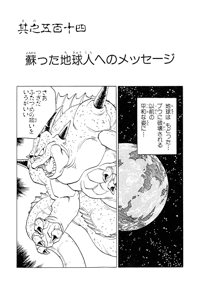 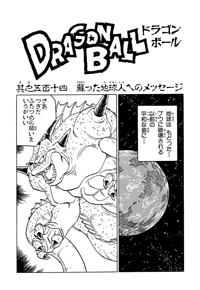 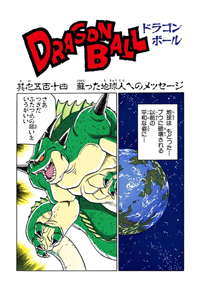 A Message for the Revived People of Earth

The Earth has been restored to its previous peaceful state, as it was before it was destroyed by Boo. Porunga wants the second wish, and so Dende relays it. Porunga says it will take a little while, because of the large amount of people to deal with. Meanwhile, the evil Boo kicks the good one through a nearby mountain, and then rips off his own arm and throws it at the good Boo repeatedly. Vegeta says the fatty’s power is dropping, and asks Dende if the wish has been granted yet. Old Kaiōshin explains that Porunga is having troubles, when his halo suddenly disappears. Porunga says the second wish is granted, and Dende excitedly informs Vegeta. Vegeta’s halo also disappears, making Goku shockingly note that he’s no longer considered a bad man.

The people of Earth notice their revival, including Gohan, Piccolo, and the boys, as well as everyone at God’s Temple. Goku asks Vegeta if his plan was to revive Gohan and Trunks and everyone so they could help fight. Nope. Vegeta wants him to prepare a Genki-Dama. Goku doubts that gathering a bit of genki from all the Earthlings will be enough against Boo. Vegeta says this was what he meant about the Earthlings taking responsibility for themselves. It won’t be just a little bit of genki; they’ll make the people give more. Dende says Porunga wants the third wish, but Vegeta says it doesn’t matter. Vegeta then wants to somehow speak to all the Earthlings at once, like Bobbidi did. Kaiōshin says that’s impossible. “Leave that to me. It’s my special technique!” Goku recognizes that as Kaiō’s voice. Kaiō is glad Vegeta has chosen his Genki-Dama to be the deciding factor. He then tells Vegeta to speak, and he could even speak to the whole universe if he wants.

Vegeta speaks out to the Earthlings, explaining that they were all killed by Majin Boo, but now they’ve been returned to life through strange powers, and their towns and homes have been restored as well. So, this is no dream. Satan doubts this “not a dream” business, but Goku shushes him. Vegeta continues. “Now, somewhere, there is a warrior who is fighting Majin Boo in place of all of you!! To put it frankly, you could say the situation is pretty bad! Majin Boo’s strength far exceeds even Cell’s! So, I want you to lend your power!! Raise your hands toward the sky!! We’ll collect your power to defeat Boo!! You’ll get pretty tired, but don’t worry! It’ll be the same as if you’d run really hard! Well, do it! Raise your hands!!” Kaiō thinks that was no way to ask.

Vegeta tells Kakarrot to hurry up and begin, and Goku is impressed with Vegeta as he rips the remains of his outer shirt off. Goku then takes to the air, raises his hands, and says, “Everyone!! Lend me as much genki as possible! I’m beggin’ ya!” Gohan, Trunks, and Goten heed first, as does Piccolo, who says this is very unlike Vegeta. The others at God’s Temple do the same. Goku has a really big Genki-Dama now, but Vegeta says it’s still not complete, wondering why. Vegeta then hears the Earthlings being hesitant about raising their hands, and gets angry they’re not helping. 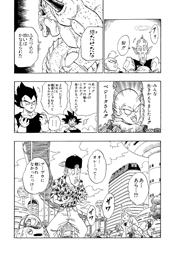 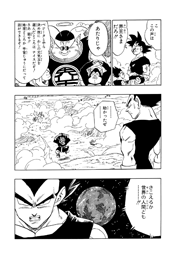 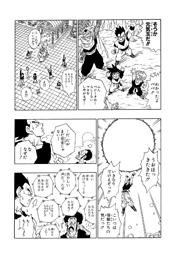