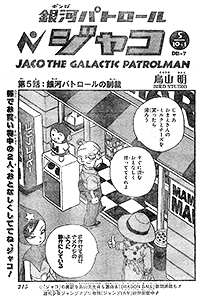 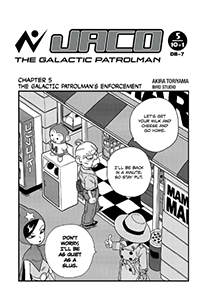 Omori wants to get the cheese and milk for Jaco and just move on, so Jaco agrees to hold tight while Omori shops.

As Jaco stands around waiting, he hears a commotion from around the corner. A group of men are pestering a girl who has apparently spilled a drink on them. They insist that she pay for the mistake, and even raise the price when she refuses. Jaco makes his way over and is unable to control himself as he literally jumps into action.

Jaco will not forgive them for hitting a woman (she is a woman, right?), and while he cannot reveal his identity, he will teach them a lesson for the good of the galaxy.

Omori walks back outside saying he did not know exactly which cheese to buy, but when he does not see Jaco, he figures that something bad is happening.

Jaco starts his assault with the punk who called him short. Jaco went easy on him; he would otherwise be dead. The other jerks should apologize and regret their actions, but they rush in to attack Jaco, as well. Jaco jumps straight in cross-armed and takes them all out. One of the men tries to shoot Jaco after being knocked down, but Jaco catches the bullet. As he knocks the last guy out and poses, a small crowd surrounding Jaco begins to applaud.

The young woman makes her escape as police start to appear on the scene. The policemen start to question Jaco, who mistakes them for more of the same type of punks. Jaco beats them up, too, right as Omori shows up and nervously tries to get Jaco to run away with him. As Omori and Jaco try to hide and escape, the young woman shows up and tells them to follow her. 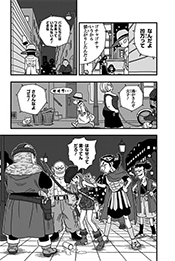