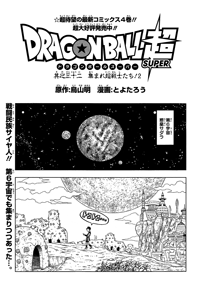 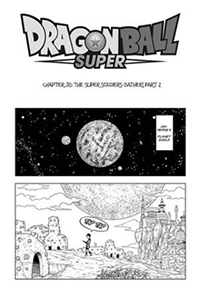 Over in Universe 6, Cabba visits Planet Sadal at Champa’s insistence to gather the best fighters, irrespective of whether they are good or bad guys. Cabba notices a vehicle drive by that should be one of their own. Two men discuss being in Caulifla’s territory, but they are soldiers in Sadal’s army after all. Their car comes to a sudden stop when a woman appears in front with a foot to their bumper. It is Caulifla herself, and she demands the men hand everything over to her and her three cohorts. Though one of the men wants to let it slide, the other grows frenzied and attacks Caulifla, who easily dodges the punch and slams the man into a nearby building. The bags are filled with food and jewels meant to be tributes to the king of Sadal. The attacked man pulls a gun out, which disappears just as quickly as he drew it; one of the other women with Caulifla casually holds it in a hand behind her back, and proceeds to crush it.

Caulifla and the others sort through their loot when Cabba appears at their door, using a ki blast to shoot a gun out of one of the hoodlum’s hands. Cabba presumes the woman in charge is Caulifla.

Back in Universe 7, Shin wonders if the other universes have chosen their warriors yet, as Bulma walks by to find he and Whis conversing. It is late at night, but Whis has no need for sleep, and Shin is still worrying over this selection process.

Cabba is clearly making little progress with Caulifla, as seen by his flying through the air following an attack. Caulifla has no interest in joining the tournament, unless Cabba can somehow force her to… but she has yet to meet a single other Saiyan who can defeat her. Cabba transforms into a Super Saiyan and quickly moves behind Caulifla, who is unable to keep up with Cabba’s attacks now. Cabba references the transformation by name and how the Saiyans in Universe 7 can all do this, further confusing Caulifla. Following an extended series of attacks, Cabba stops short of delivering a final blow to Caulifla, instead extending his hand to show one of the stolen jewels. Caulifla’s cohorts watch on as Cabba demands its return and further explains their sticky situation, promising to teach her how to transform if Caulifla joins them in the tournament. Cabba requests some water, and in the meantime, somehow one of Caulifla’s cohorts has stolen the jewel back again from Cabba without his noticing.

Beerus wakes up at Capsule Corporation to find Kuririn there, who states that the Turtle Hermit will also be joining them. Kuririn mentions prize money, which confuses Vegeta. When Goku returns, Kuririn reads him the riot act for lying about the true stakes, but ultimately agrees to still fight. They still need one additional teammate, though! Beerus notes that everyone they have chosen is from Earth, no thanks in part to Freeza and his army being wiped out. Goku suddenly has a bright idea: they should bring Freeza back from the dead to fight with them! They do not have time to gather the Dragon Balls, but they could just have the Fortuneteller Crone bring him back for the day. Vegeta questions Goku’s desperation, assuming they would be able to win with their team as it stands already. Goku admits that he already lost to someone in Universe 11, however, and that they seem to have someone even stronger than that on their side. Whis explains that he does not really make it his business to know about warriors in other universes, but it is possible that some warriors could be participating that no-one has never seen before.

In Universe 6, Cabba travels off with Caulifla, who has apparently already mastered the new Super Saiyan transformation. Cabba has also asked one of Caulifla’s cohorts, Kale, to tag along as they need all the help they can get. Caulifla admits that Kale is promising, but still has a ways to go.

Kuririn concedes that they may indeed need Freeza, and even Vegeta is willing to go along with the plan. Beerus comments on how low they have fallen to be recruiting dead people, though Whis sees it as a unique move and posits they should wait and see if it is a smart move after all.

Down in Freeza’s own personal hell, the tyrant awakens from a flashback of his loss against Vegeta and Goku to a scene of parading fairies… and Goku himself standing before him. Goku offers Freeza a chance to get out for 24 hours, but Freeza can tell there is more to this offer.

The next morning, Goku has still not arrived back with Freeza. The others have all gathered: Vegeta, Gohan, Piccolo, Kuririn, No. 18, No. 17, Tenshinhan, and the Turtle Hermit. Vegeta comments on Gohan’s growth, and assures No. 17 that his island is in good hands with Trunks. Tenshinhan assumes that Goku is off getting Yamcha, and if it comes down to it, he will go get Chiaotzu himself. Just then, the Fortuneteller Crone blips in with Goku and Freeza in tow, each looking rather ragged; Goku apparently had to do some persuading. Piccolo throws them each a senzu, as it is time to leave. Freeza has gotten even stronger, using his time to image train and preparing to murder them all, but Beerus says he will stop Freeza himself if it comes down to it. Whis wonders how Goku managed to convince Freeza in the end, but apparently all it took was a promise of resurrection should their universe survive!

Beerus and Whis gather everyone up in a circle, holding hands, explaining that this is a battle royale and they need to all get along for once. Whis contacts the Great Priest and announces their readiness. Bulma bids everyone farewell, and the group departs for the Tournament of Power. 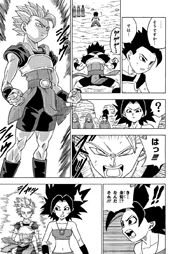 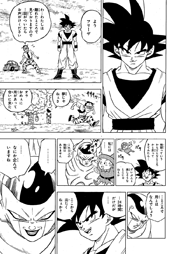 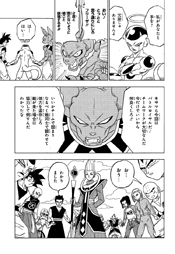