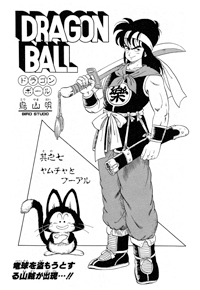 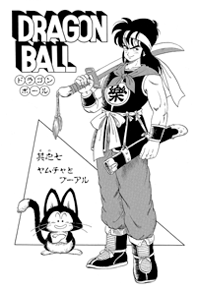 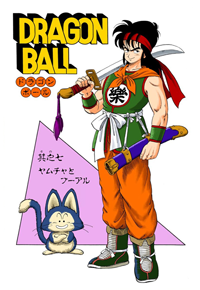 Still riding down the river, Bulma announces that their next destination will be Mount Frypan, and Oolong says he’s not going there. It’s the home of Gyūmaō, a really scary guy. Oolong turns into a fish and dives into the water to escape, and as Goku takes off his clothes and prepares to swim after him, Bulma says she’ll catch him. She takes off her panties and puts them on a fishing rod, and sure enough, she catches him. Goku says next time, he’ll eat Oolong. Bulma then gives Oolong a candy ball. Goku can’t have one, though, and Oolong says it’s because he’s the type women like. The boat runs out of gas, and then Bulma asks if Oolong can change into gasoline. He says no, so instead he turns into an oar.

Goku paddles them along until they take shore, and Bulma notices her Hoi-Poi Capsules missing. She probably dropped them in the river, and so she asks Oolong to become a fish and go find them (with a promised prize of panties for it), but Oolong says it’s impossible in such a deep river. Bulma complains about how the boat won’t move, and she has no house, no car, no bike, but Goku says she can walk. Bulma says it’s no problem with him on Kinto-Un. Goku then suggests Oolong turn into a bike for her, and then she notices he’s missing.

Goku goes after him, and then Bulma shouts out “Pee-Pee, Pee-Pee!” Oolong suddenly has to take a crap, and ducks in some bushes. Bulma says it was the candy ball she gave him, called PP Candy. Shouting out “Pee-Pee!” will make anyone that ate it have diarrhea. Bulma has Oolong under her control now, and Goku likes calling out “Pee-Pee!” Bulma tells Oolong to turn into a bike now, and he turns into a little scooter that can’t support her weight. Then Oolong turns into a pair of panties, which he has more confidence will work for her, and it only pisses Bulma off more.

The three of them have wandered into a desert now, with lots of weird rock formations. Bulma and Oolong are exhausted, and Goku can’t believe them. Bulma and Oolong have to stop, as Bulma takes a rest under a rock formation. Oolong says she’s selfish and has a bad personality, and decides they should also take a nap. Goku just sits down and says he’s hungry. Elsewhere, a tiny floating cat spots Goku and Oolong from a hideout, and runs inside and tells his friend, Yamcha-sama, that there’s ducks out there. Yamcha thinks that’s great, it’s been a while since they’ve had any game. Yamcha tells the cat, Pu’er, that a boy and a pig will be no problem, and the two of them hop onto the Jet Momonga, and ride towards Goku and Oolong. Oolong is hungry now too, and Goku says he’s going to go find some food. “Do you like pork?” As Oolong’s yelling at him, they notice the Jet Momonga headed their way. 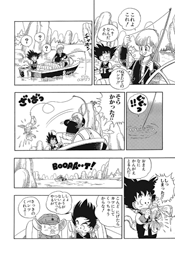 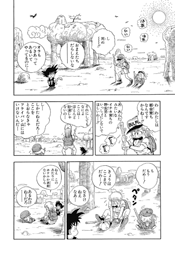 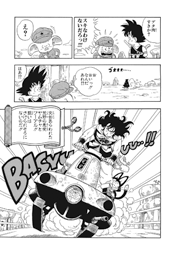