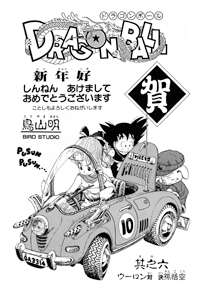 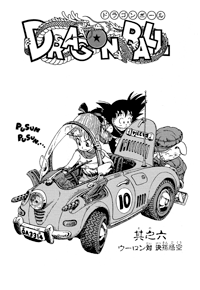 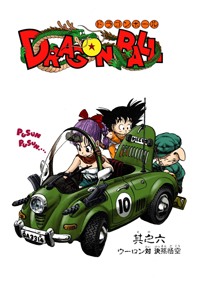 Oolong tells Goku now would be the time to apologize for fooling him, but Goku just tells him to bring it on. Oolong boasts some more, and Goku wants him to hurry up with the match. Suddenly, Oolong looks at the clock, and then runs out of the village yelling to hold on a minute. Goku runs after him, only to find a pig dressed in a Chinese Communist outfit standing outside the village. Goku asks the pig if he’s seen a bull, and the pig points to his left, so Goku runs off in that direction. The pig says he’s Oolong-sama‘s true form. A narration box reveals the mystery of Oolong: “The time of Oolong’s transformation is only five minutes. (Within those five minutes, he can transform as many times as he wants.) And then, for him to transform again, he must take a one minute rest!!”

Goku returns to the village and says Oolong’s run off, and Oolong looks at his watch. A whole minute’s passed, so now he can transform again. A giant metal robot enters the village and challenges Goku, saying he’s the strong Oolong-sama, and says he’s going to put Goku in this soup and eat him. But then he gets some soup on his thumb and burns himself, blaming Goku. A little boy then shoots Oolong in the back of the head with a slingshot, and his mom comes and takes him away. Goku thinks Oolong seems really weak, and Oolong explains that he’s the world’s strongest. Oolong asks about Goku’s strength, and he says Grandpa taught him martial arts. Oolong wants him to demonstrate his strength by breaking through these three bricks with one hand. Goku easily does it with one finger, and Oolong cowardly transforms into a bat and flies away.

Bulma yells at Goku to catch him so they can find out where his hideout and the girls are. So Goku calls for Kinto-Un, and flies off after Oolong. Oolong notices that Goku is giving chase, and so the scared bat changes into a much quicker rocket. Goku still maintains a steady chase, until the five minutes run out, and Oolong turns back into a pig. Goku catches Oolong as he falls and takes him back to the village, where he’s tied up and put on a leash. The villagers tell him to return the girls now, and so he leads everyone to his house. His house is a giant palace, and everyone’s impressed. The parents rush in, only to see their daughters relaxing and living a luxurious life. Oolong says he just wanted a nice, calm girl, so he’s glad to get rid of these spoiled ones.

After saving the girls and receiving the Dragon Ball (not actually shown), Goku, Bulma, and Oolong are riding along a river in the Capsule No. 8 Boat toward the next Dragon Ball. Goku asks why they brought Oolong along, and Bulma says that his transformation abilities might come in handy. Oolong wants to leave, until Bulma says it’s hot, so she may sleep in just her underwear tonight. Goku then pat-pats Oolong, “You’re a man!” Oolong yells that it should be pretty obvious, since he likes girls and hates men. 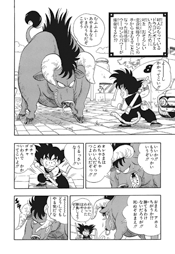 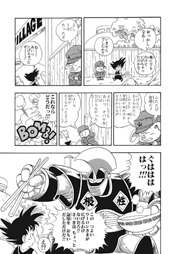 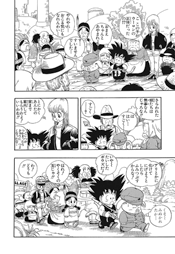