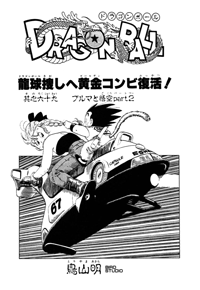 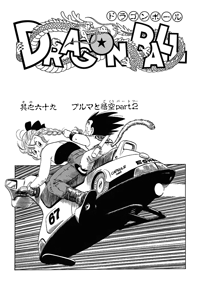 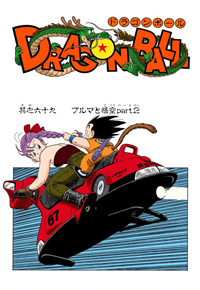 The policeman says to try talking into the interphone, but Goku doesn’t know what that is. So the policeman calls in and asks about Bulma-san. A robot says Bulma-sama is still at school, and then the policeman remembers that school isn’t out yet. Goku says he’ll wait, and tells the policeman he can go now. But the policeman says he can’t until he makes sure Goku isn’t a bad person; it’s hard to believe someone like Goku would know the daughter of the owner of a top class company like Capsule Corporation. Then Goku says he smells her, and she’s coming this way on a futuristic motor scooter thing.

Bulma’s impressed to see that Goku found her house, and he explains that the policeman helped. Bulma asks him what he wants, and Goku says that the radar she gave him got all broken and he wants her to fix it. Bulma says that’s nothing, and tells them to come inside. The policeman also asks if he can’t also get his scooter fixed. Bulma’s dad rides in the room on a bicycle, with a little black cat on his shoulder. He hops off, and Bulma tells him this boy is who she’s told him about. So, Bulma’s dad goes up to the policeman and says he’s not the chibi he heard about; he’s really large and doesn’t look twelve. But then he sees the real Goku, and they greet each other. The policeman wonders if this is really the Dr. Brief who invented capsules. Bulma says they’re going upstairs, and asks her dad to fix the policeman’s scooter down here.

At Red Ribbon Army Headquarters, Red and Black wonder why the enemy has gone to West City. A bear guy comes in and informs them that they received a picture of the enemy from General White. Red can’t believe that this is the brat that wiped out Silver and White. They don’t know which of the four remaining Dragon Balls he’ll be after. So, Red yells at the bear guy to send this picture to all units, and inform them to find and kill him.

Bulma is finished fixing the Dragon Radar, and notices that Goku has only found two balls so far. Bulma decides she’ll go with him to find the Dragon Balls. Goku says she’ll just get in the way, and she yells that if she’d been with him, he’d have already found his grandfather’s Four-Star Ball. Goku asks how she plans on going, since she can’t ride Kinto-Un, and Bulma laughs and shows him her watch. It’s a Microband, and if you press this switch, it makes you small. So, she shrinks down to mouse size. And then a woman comes in and steps on her. “So, you’re Goku-chan, huh!! Nice to meet you!! I’m Bulma’s mama!!” Bulma grows back to normal size, and then her mom asks what she was doing under her foot, and Bulma yells at her.

Bulma and Goku head downstairs, where Dr. Brief is working on the policeman’s scooter. While getting a capsule case, Bulma tells him that she and Goku are off to search for the Dragon Balls again. Dr. Brief tells her to get dad a lovely gal, and she yells at him about husband and wife being the same. Outside the house, the policeman watches on his scooter as Goku calls Kinto-Un. Bulma turns tiny again and hops into Goku’s shirt, and they fly off. The policeman says he doesn’t understand the rich, then turns on his scooter, and flies down the street with it. He crashes into a lady’s car with his suped-up scooter, while Dr. Brief notes that Bulma mistakenly took his capsules… 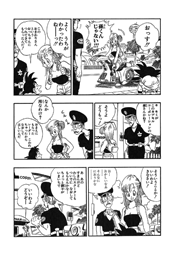 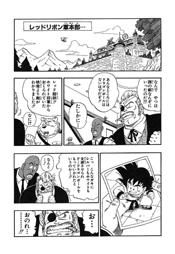 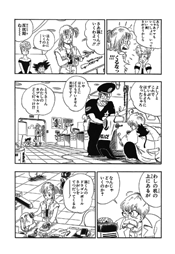