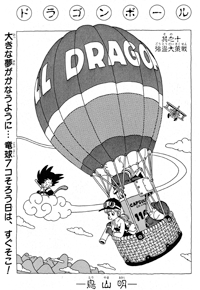 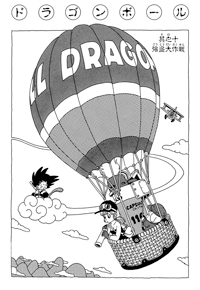 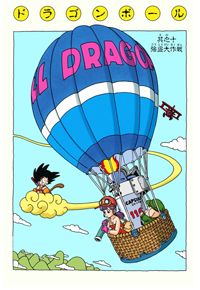 The next morning, Oolong is in the driver’s seat holding a shotgun, and Goku wakes up with a bit of a hangover. Oolong says he was up all night, because Yamcha and Pu’er tried to attack last night. Goku is surprised to have not noticed it, and Oolong regrets having given him the sleeping medicine after all. Bulma then wakes up and yells at him about not washing her clothes, but Goku explains how Oolong was up all night watching out for the bad guys, which prompts her to start daydreaming about Yamcha. Oolong says he does have one outfit she can wear, and it’s upstairs.

Goku says he’s hungry and Oolong says that that’s all he ever says. Then Goku starts eating a month’s worth of food. Bulma doesn’t like the bunny outfit at all, and she yells at Oolong, but that was all he had. Then she tells Oolong to drive them to Mount Frypan now, since she has to do her make-up. At their hideout, Yamcha notices they’ve started moving, and so he tells Pu’er to prepare the Mighty Mouse, and to get the Panzerfaust and automatic rifle.

Oolong drives the camper along, as Yamcha follows in the Mighty Mouse. Pu’er drives, and Yamcha fires off the Panzerfaust at the camper, just as Bulma gets excited at seeing him again. The camper crashes and loses a tire, and Bulma gets knocked out. Yamcha says for them to quietly hand over the Dragon Balls, but Goku just sticks out his tongue. Yamcha hands Pu’er the automatic rifle, and decides to fight with his fists; he’s going use his Rōga Fū-Fū Ken again. Goku yells out he was hungry yesterday, but not today, and the two exchange a few punches. Then Goku gets in a good kick to the face, knocking out one of Yamcha’s teeth. Pu’er turns into a mirror and shows him, and the two of them flee after Yamcha sees this. Oolong is very impressed, but still, those guys did destroy their ride, so they’ll have to walk from here on out.

Yamcha decides it would be easier to let those three find all the Dragon Balls first, and then they’ll steal all seven from them at once. Meanwhile, Goku carries the unconscious Bulma on his shoulders, and Oolong volunteers to take her off his hands. Then Yamcha and Pu’er pull up in the Mighty Mouse, smile, apologize, and give them a capsule containing a replacement car. They say “take care” and “goodbye” as they leave. Oolong is a bit suspicious, but Goku thinks nothing of it, and they head off to Mount Frypan. Little do they know, Yamcha and Pu’er have installed a homing device in the car, and use it to follow them towards the Dragon Balls. 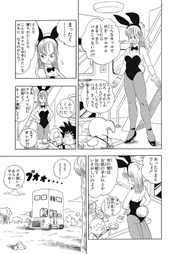 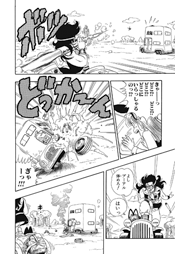 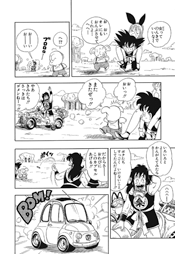