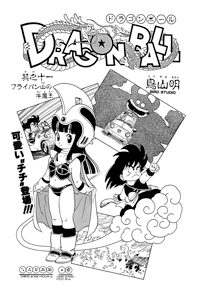 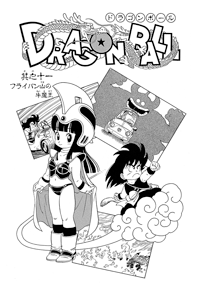 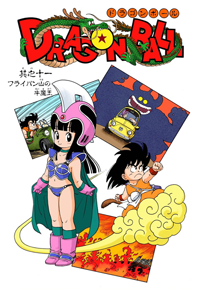 Bulma, Oolong, and Goku continue down a road towards Mount Frypan in their car. Bulma wonders about the heat, since they’re heading north. Oolong then explains about Mount Frypan. “Mount Frypan was originally a “Mountain of Refreshing Scenery” and easy to overcome. But about ten years ago, a fire spirit from heaven came down and turned it into a flaming mountain, and it seems that completely changed the climate.”

They reach the mountain, which is covered in flames, to explain the heat. Oolong wants to leave, because Gyūmaō’s also here. Bulma wants to know more about this Gyūmaō, so he tells her how incredibly scary he is, and how he’s even called the “emperor of devils”. At the top of the mountain is Gyūmaō’s castle. The castle is full of lots of stolen treasures, and so since many people are after it, Gyūmaō watches over everything. The sixth Dragon Ball is most certainly in there, but according to Oolong, Gyūmaō himself isn’t in the castle. Gyūmaō guards the castle from the foot of the mountain, because the mountain was set ablaze while Gyūmaō was out on a picnic with his child. The fire is so great that even Gyūmaō can’t return home. Bulma compliments Oolong on his knowledge, but Oolong says it was all in school books. Oolong then tries to drive off in their car, saying not even Goku is a match for Gyūmaō. But Bulma just calls out “Pee-Pee Pee-Pee”, and Oolong pulls over and jumps into the bushes.

Pu’er looks on their radar, and notices they’ve started moving again, and Yamcha says they’re going to Mount Frypan. He thinks Gyūmaō probably has the sixth Dragon Ball. Pu’er thinks they can’t do anything against both the fire and Gyūmaō. Yamcha thinks about how the kid is Son Gohan’s grandson, and Son Gohan and Gyūmaō were both students of Muten Rōshi. Just then, the two of them hear a little girl screaming. She’s running from a huge tyrannosaurus. The girl has a round blade sticking from the top of her helmet, and she takes it off and throws it at the dinosaur, cutting off its head. The blade comes back to her (it’s like a boomerang), and the dinosaur’s remains freak her out, so she fires a beam from her helmet and blows the body and severed head up.

Yamcha and Pu’er’s jaws drop. Then the girl runs some more, and sees the two of them. Yamcha weakly greets her. She screams and fires off her helmet beam again, nearly shooting Yamcha in the crotch. Yamcha then whacks her on the back of the neck, knocking her out. They hop back into their car and continue along towards Mount Frypan. Pu’er notes that Yamcha-sama was so cool around that little girl, and Yamcha says it’s because he’s not a pedophile.

Goku, Bulma, and Oolong have arrived in an abandoned, run-down village at the foot of the flaming mountain, with lots of skeletons scattered around. Bulma complains about the heat, and Oolong says for her to be quiet, so Gyūmaō doesn’t hear. Goku pokes at a cowboy skeleton with a stick. Bulma checks the Dragon Radar, and the Dragon Ball is definitely in the castle atop the flames. She asks Goku if he can’t get up there with Kinto-Un, and so he puts down the skull he’s playing with and calls for Kinto-Un. Oolong gets pissed at Goku for yelling so loud.

Goku flies over the flames and heads towards the castle in the middle, but it’s too hot. Oolong says they should just give up, but Bulma complains that Goku has no guts. As they’re watching, a large, axe-wielding shadow comes out of the rubble. The axe flies, and gets caught in the wall right in front of Bulma. She and Oolong slowly turn around, and then scream. It’s Gyūmaō, in an odd outfit. He takes his axe out of the wall, and supposes they’ve come to steal his castle’s treasure. Bulma assures him they haven’t. Then Goku comes back, saying it was too hot to get inside the castle, and then notices Gyūmaō. Goku wonders who the big guy is, and Bulma yells at him that it’s Gyūmaō-sama. Gyūmaō recognizes Kinto-Un, and wants to know who he got it from. Goku says he got it from Kame-Sen’nin. Gyūmaō says that Kame-Sen’nin is Muten Rōshi-sama, and excitedly asks if he knows where Muten Rōshi-sama lives. 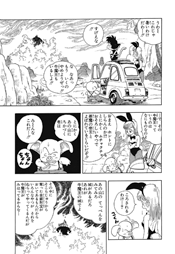 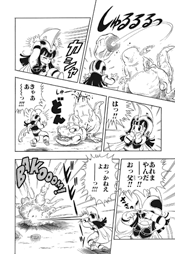 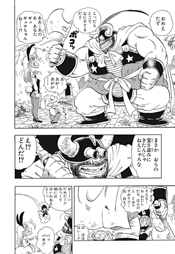