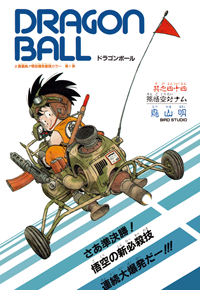 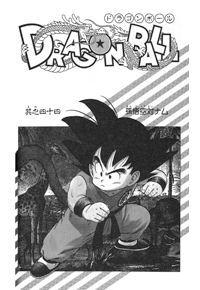 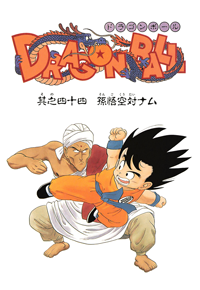 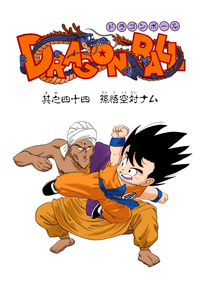 Goku stretches while Namu thinks of the 500,000 zenny prize, and how he needs it to save his village. As the match begins, Goku thinks he’ll do like Jackie did against Kuririn, and leaves an afterimage of himself. Goku kicks at Namu from behind, but Namu jumps over it, way up into the air. Then Namu comes down at Goku with a kick, but Goku hops back out of the way, and they face each other. Namu kicks at Goku a few times, but Goku blocks it. Namu then blocks Goku’s punches. Namu kicks Goku in the face, but Goku sweep kicks him.

Goku then delivers a hard blow to Namu, sending him flying into the wall. But at the last minute Namu kicks off the wall and comes back and chops Goku in the side of the neck, taking him down. While Goku’s on the ground, Namu runs over to take the win, but Goku trips him with his tail. All of a sudden Goku announces that he has come up with a new technique, and starts spinning around. He spins like a tornado and comes whirling towards Namu, knocking him backwards. Namu stands to try countering it, but he’s at the edge of the ring. Namu thinks it’s all over, but then Goku stops spinning right in front of him, and falls over dizzy. Namu falls over, nearly a ring out, and decides to take this opportunity to win.

Namu jumps straight up, and says he’s going to attack from the heavens. He crosses his hands, forming an X, and dives straight down at Goku, announcing his Tenkū Pekeji-Ken. He silently asks this boy to forgive him, for he’s doing this to save his village. As he dives he says “Namu Amida Butsu” (a Buddhist prayer to Amitabha; literally means “I take refuge in the compassion of Amida Buddha”). 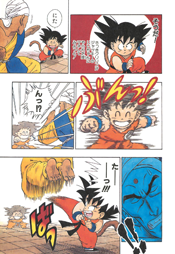 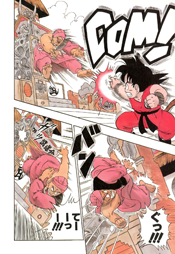 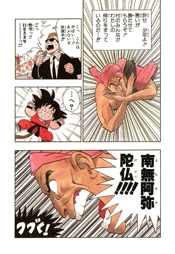