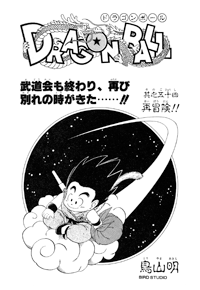 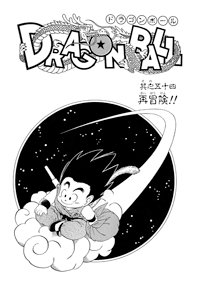 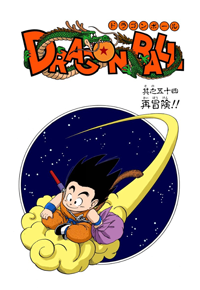 The announcer gives Jackie the 500,000 zenny prize. As Jackie goes to the backstage area, Goku and Kuririn congratulate him. Goku and Kuririn decide to go look for Muten Rōshi, but Goku’s getting a little tipsy from hunger. Out in the bushes, Jackie rips off his wig, and puts his suit, hat, and sunglasses back on.

Goku and the others wonder where Kame-Sen’nin is, but he shortly shows up. Bulma asks where he’s been and he says he was in the back during the matches, but he was on the toilet just now. Kuririn asks if he saw them fight, and Kame-Sen’nin says they both fought really well. Kuririn thinks Goku wouldn’t have lost if he wasn’t hungry, but Goku says the old man was just really strong. Kame-Sen’nin says that’s right; there are many, many strong people in the world. Goku and Kuririn get it, and Kame-Sen’nin decides to take them out to dinner. He asks Yamcha, Bulma, Oolong, and Pu’er to come with, and Bulma hopes there’s no catch…

At the restaurant, Goku chomps down, while everyone else watches in disbelief. Goku finishes another serving, and Bulma thinks that was enough for thirty people, but Yamcha says that it was more like fifty. Goku asks the waiter for two more, and everyone falls over. The waiter tells him that they’re out of ingredients. Goku says that’s okay, as his stomach says that that was the eighth serving, and everyone falls over again. Kame-Sen’nin goes to pay the bill, and it’s 470,000 zenny. Almost all of the prize money…

The seven of them drive down the city streets in a van, and Yamcha asks what they’ll do now, more training? Kame-Sen’nin says he can’t really teach them any more, and they’ll have to take their own paths from here. Goku says he’s going to go find Grandpa’s Dragon Ball (Four-Star-Ball). Kuririn doesn’t know what that is, so Goku says it’s his dead grandpa’s memento. Goku thinks it’ll be good training and Oolong says he’s not going with him. Kame-Sen’nin asks Kuririn what he’ll do, and he hasn’t decided, but maybe he’ll stay with him longer. Kame-Sen’nin curses the fact that he can’t be alone with Lunch.

Yamcha wants to take Kame-Sen’nin and Kuririn home, as thanks for dinner. They pull over, and Bulma digs around for her plane capsule. Goku points to Kame-Sen’nin’s briefcase and asks if his stuff’s inside. He straps on his Nyoi-Bō and says he’s leaving on Kinto-Un. Kuririn can’t believe he’s already leaving, but Goku says it won’t take him long to find it. He calls Kinto-Un and everyone says goodbyes, good luck, etc, and he flies off into the night. Everyone else gets back in the van, since Bulma apparently lost the plane capsule. She says beautiful people can make mistakes too, and then the van starts to run out of gas. 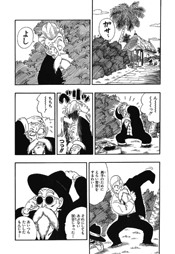 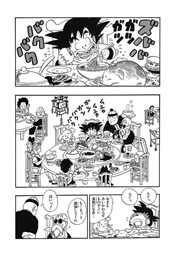 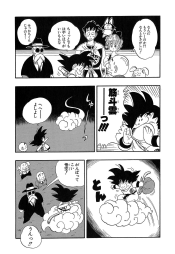