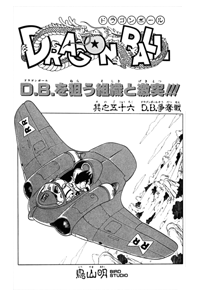 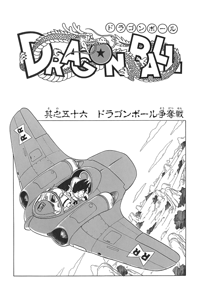 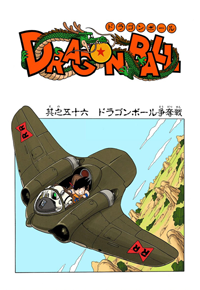 The Struggle for the Dragon Ball

Silver takes off his trench coat, and continues asking questions, but Goku just ignores him and walks away. Silver rushes over and snatches Goku’s sack, and asks if the radar is in here. Goku gets angry, and runs over and snatches it back. Silver realizes he’s not an ordinary brat, but nevertheless boasts he’ll beat him in five seconds. Silver throws a punch at Goku, but Goku just ducks it and kicks Silver in the gut. Silver staggers back, and kicks at Goku in frustration. But Goku jumps over it, and whacks Silver in the face with his tail, knocking him out.

Goku walks off, wondering what he’ll do without Kinto-Un (it’s a long way to run to the next ball). He realizes that these guys must have those capsule things in the house. After finding a case, he tries throwing one and out pops a robot. The robot greets him and asks what he wants. Goku says he wants to go that way. The robot suggests he go that way. Goku explains that he wants to go really far, so he needs something he can ride in. The robot says to try the No. 3 capsule, and out pops a plane. Goku says he can’t ride it, but the robot knows how to pilot it, and away they go.

In the far-off west lies the Red Ribbon Army Headquarters. Inside, there’s a short guy with an eye patch and a cigar. Commander Red. Red complains to his tall assistant, Assistant Black, about the troops not getting the Dragon Balls fast enough. A bear then comes into the office, and informs Red that something has happened to the Dragon Ball that Colonel Silver was after. They head into the control room, and Red notices the Dragon Ball is moving on the radar. The bear says it’s moving north, towards General White’s area. Red yells to get Silver on the line, and Silver slowly gets up and stumbles towards the house to respond. Red wants to know what’s going on.

In the plane, Goku asks if it isn’t getting colder, and the robot says robots don’t get cold. Meanwhile, Red wants to know who this strong enemy is that has a better radar. When he finds out it’s a lone kid, he declares that Silver will be executed. Red tells Black that it’s a kid, and tells him to contact General White with orders to kill the brat and get his Dragon Ball. Red then tells Black not to stand near him, so he doesn’t make Red look short.

Goku wants to know why it’s so cold here, and the robot says it’s just cold in the north. Goku looks at the Dragon Radar, and says the Dragon Ball is just below them. But the robot is frozen and the plane soon crashes. Goku is safe a distance away, lying freezing and unconscious in the snow, and two Red Ribbon soldiers spot the crash. A nearby, well-guarded tower is White Company Base. A Russian-looking guy in a sweater is in the top floor control room, and he receives word of the plane crash. It must be the brat’s plane, as relayed from Headquarters, but there is no one inside but a robot. He tells the soldiers to look for the brat, who probably got away. As the soldiers begin to look for him, a little girl drags the unconscious Goku through the snow… 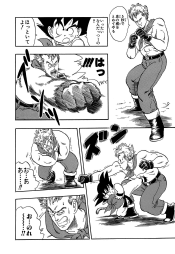 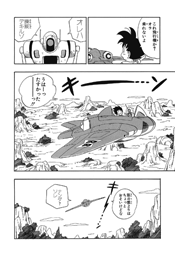 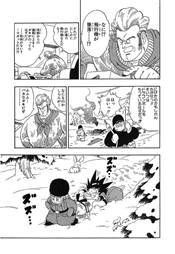