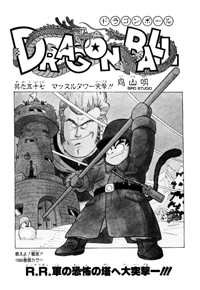 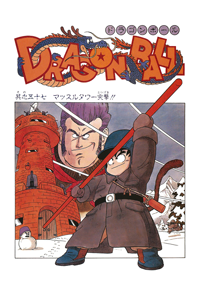 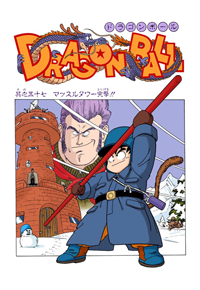 The name of White Company Base is Muscle Tower and its leader is General White. White continues ordering his men to get the brat’s Dragon Ball and his radar, while a red-haired girl drags Goku to a village. She knocks on a door, and tells her mother she found a kid. Some time passes, and Goku, who’s sitting next to the fireplace wrapped up in a blanket, wakes up. Goku asks where he is, and the girl says this is Jingle Village. Her mother gives him some hot cocoa, and explains that her daughter saved him. The girl asks what he was doing out there, so Goku explains that he came searching for Dragon Balls, but his plane fell down. When they hear about the Dragon Balls, they get scared and ask if he’s one of the Red Ribbon Army. Goku remembers the guys from before talking about that. Outside, two soldiers spot the tracks left by Goku being dragged through the snow.

Goku asks why these Red Ribbon guys want the Dragon Balls. the girl and her mother don’t know, and they ask Goku why he’s searching. Goku explains that he wants his Grandpa’s memento ball, and shows them the Four-Star Ball. He explains that by gathering all seven, a dragon will appear and grant your wish. The mother thinks the Red Ribbon Army must be plotting something evil. Goku says there should be a Dragon Ball nearby. The girl says the Red Ribbon’s making all the village men, including her father, search for it. Goku asks why they don’t just beat them up. She says they’re amazingly strong, and points out the window to their base, saying they’ve taken the village mayor hostage and have threatened to kill him. Goku straps on the Nyoi-Bō and decides he’ll beat these guys up, as he thanks her for saving him, but she tries to tell him that it’s too dangerous.

The two soldiers bust in through the front door, and Goku asks if that’s her father. It isn’t, so… Goku jumps over to the two guys, and attacks them in the blink of an eye. They collapse. The girl asks what just happened, and Goku says it was six punches and four kicks. So, Goku heads out the door to go beat them up… But comes back a minute later, freezing. Before he leaves again, he bundles up in a winter outfit. He asks the girl about the white stuff outside, and she tells him its snow. Goku then darts off again, and she thinks he’s weird, but her mother says he’s a good kid.

Goku is nearing Muscle Tower, and a soldier outside radios in to White that a weird kid’s coming; probably “the” kid. White says to kill him, and the soldiers outside begin to fire at him. But Goku blocks the bullets with the Nyoi-Bō. “Extend, bō!!!” Goku swings it around and knocks all the guys out, then pole vaults up to the second floor (still outside, though). White is a bit impressed, and wonders if he can make it to the top floor. 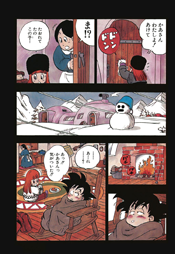 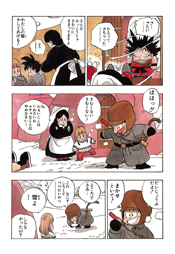 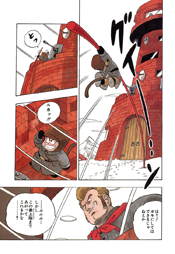