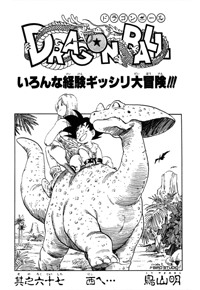 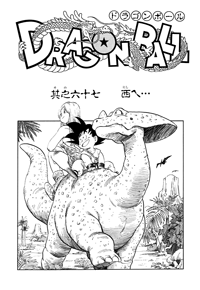 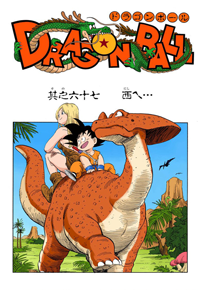 It’s dark outside, and everyone’s eating at the red-haired girl’s house, with Goku inhaling everything. The girl’s dad is home now, and he and the mayor are grateful to Goku and Hatchan for what they’ve done. The girl’s mom mentions the Dragon Ball, and the father says they never did find it, and wonders where it is. Hatchan says he has it, and takes the Two-Star Ball out of his pocket. The father asks why he has it, and Hatchan says he found it when he went outside, but kept it hidden because General White said that he’d kill all the villagers once it was found. At that, the mayor says that he really likes them, and invites Goku and Hatchan to come live at his house. Hatchan’s worried, though, since he’s an Artificial Human, but the mayor says how even if he was a real human, bad guys are bad guys.

Hatchan tears up and says he’s really happy, then asks Songoku if he’ll live with them, too. Goku says he can’t, since this ball isn’t Grandpa’s memento. Hatchan thinks he’ll be lonely, but Goku says they’ll surely meet again someday. The girl’s mother thinks the boys should stay here for the night, and then the mayor heads off, saying Hatchan can come live with him starting tomorrow. The kids are all in the girl’s room now, with Hatchan and Goku in futons on the floor. The girl thinks the Dragon Balls are pretty, and Goku says she can have them. But she doesn’t want them, in case the Red Ribbon Army comes back. So, Goku will hold on to them, and he puts them in his little sack with the Dragon Radar. Hatchan asks if that’s the radar that General White kept talking about, and Goku says this guy named Bulma gave it to him. Goku tries clicking the top to see where the next ball is, but nothing happens, and Goku thinks it must’ve got broken while he was fighting. Hatchan wants to take a look, but it’s too complicated for him to fix, so Goku thinks he’ll have to go to Bulma’s house to get it fixed.

Goku thinks he remembers that Bulma lives in ‘West City’, but doesn’t know which direction it is to get there. The girl says that she thinks it is “that way”. Hatchan says that it is incredibly far to get there, and wonders how Goku will do it. Goku decides he’ll just walk, and everyone wishes him good luck. They all go to sleep, and Hatchan thinks sleeping in a futon feels good.

“The next morning…” All the villagers are outside now, and Goku’s bundled up in winter clothes again. The girl’s father is surprised to hear he’s walking, and Goku explains how Kinto-Un got all broken. “What!? Kinto-Un, you say!?” asks an old man, wanting to know if Goku can ride Kinto-Un. Goku asks how he knows about Kame-Sen’nin’s Kinto-Un, and the old man explains that there used to be a bunch of those when he was a kid. The mayor affirms that, and says there haven’t been any people around here with good hearts to ride them anymore. The old man asks if he’s tried calling it since it got broken, and Goku hasn’t, since he thought it died. So, Goku calls, and Kinto-Un whooshes in, and Goku happily hugs it. Then he says goodbye to everybody, and zooms off toward West City. 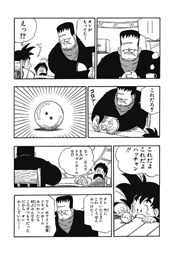 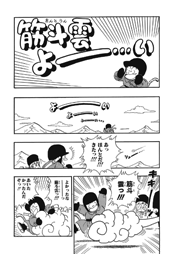 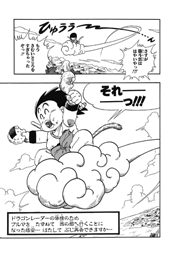