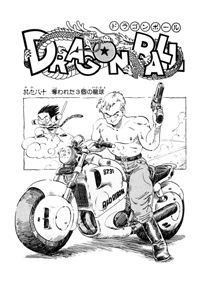 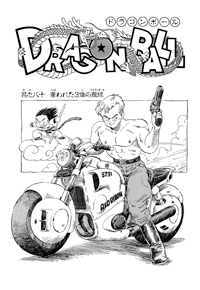 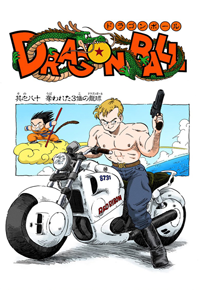 Back at Kame House, Kame-Sen’nin can’t believe they’re giving him the diamond, and Bulma tells him it’s worth tens of billions of zenny. Kame-Sen’nin thinks to himself about how he could have stripper’s every day, and Kuririn wants him to not waste that, since they almost died getting it. Umigame thinks he should hold onto it so that Kame-Sen’nin doesn’t do anything bad, and Kame-Sen’nin yells at him.

Then Lunch (bad) pulls out a gun and tells them not to move, and to quietly hand over the diamond. Kame-Sen’nin obliges, and then Lunch blasts off in the Red Ribbon plane. Bulma doesn’t understand what just happened, since she’d never met Lunch before, and so Kuririn and Kame-Sen’nin explain how she changes when she sneezes.

Blue, meanwhile, spots their secret base on the island with his binoculars. He grabs some rope and dives down onto the island from his plane, landing on his feet, and he hides behind the side of the house. Goku talks about how he’s going to go find the next Dragon Ball, and Bulma asks Kame-Sen’nin if he’ll lend her a plane to return home with. He doesn’t have one, and offers to let her live here as his mistress, and she yells at him. Goku wants him to hold onto these Dragon Balls, and Kame-Sen’nin explains to the worried Kuririn about how he, the great Muten Rōshi, has no trouble taking out the Red Ribbon Army.

Blue tosses the rope into the air, and uses his Chōnōryoku to telekinetically tie everyone up. “Hohohoh! We meet again. How do you like this? It’s my Two Shot Chōnōryoku.” Bulma, Goku, and Kuririn can’t believe he survived, and Blue goes in the house to find the Dragon Balls. They all struggle to get out and Kuririn asks the great Muten Rōshi to do something, but then Blue comes out with the bag full of all three balls. Blue leaves them a present as a thanks; a bomb that’ll explode in five minutes. Blue pulls out a capsule with another jet plane, and as he prepares to leave, Bulma asks if she can’t join him, but Blue says they don’t have women in the Red Ribbon Army. Kame-Sen’nin then volunteers, but Blue just takes off, telling them to enjoy their last four minutes.

They all keep struggling to get untied and get rid of the bomb, but can’t, and then Lunch (good) returns. Everyone yells for her to get rid of the bomb. She thinks she should throw it in the trash, so Goku yells for her to untie him. There’s only five seconds left, and he manages to toss it really high into the air at the last second. Then he calls for Kinto-Un, and flies off after Blue, and catches up to him over another land. 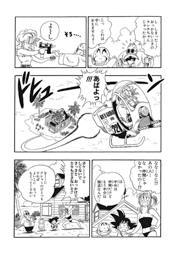 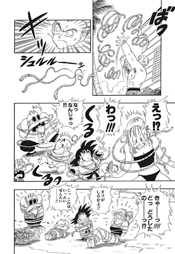 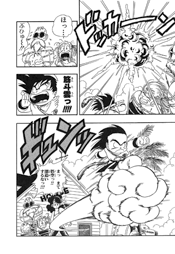