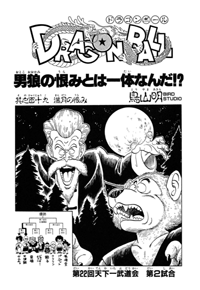 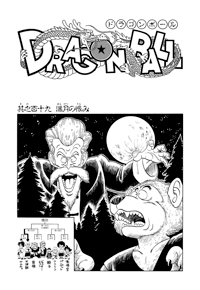 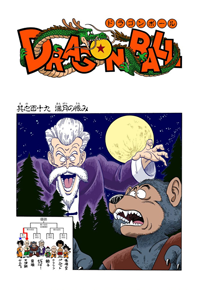 The announcer explains that Chun won the tournament last time and that Man-Wolf transforms from a wolf to a man if he looks at the full moon. Jackie wonders why this guy he has never met before is so furious with him, and Man-Wolf explains that Chun blew up the moon at the last Tenka’ichi Budōkai. So, he’s stuck as a wolf and can’t hook up with any cute human girls. Jackie says he could find a wolf girlfriend, but Man-Wolf says he hates hairy women.

“Well then, please begin the second match!!” Man-Wolf swipes at Jackie, but Jackie ducks it, jumps over another one, and then kicks him in the back of the head, knocking him into the ground. Man-Wolf is enraged, and Tenshinhan and Chiaotzu look on, with Tenshinhan not seeming particularly impressed with the previous winner. Kuririn points out to Goku that those two (Tenshinhan and Chiaotzu) are floating, and Goku is impressed.

Man-Wolf runs at Jackie from behind (who’s looking at a girl), but Jackie just back flips over him, kicking him in the back of the head again, and goes back to looking at the girl. Man-Wolf gets up and starts punching at him, but Jackie keeps dodging, then kicks Man-Wolf into the wall and asks for the count. The count gets up to seven, when Man-Wolf gets back up and pulls out a knife. The announcer says the use of weapons is foul play. Man-Wolf jabs at Jackie with the knife, but he dodges it. He grabs the knife, lifts it up, and swings Man-Wolf off of it and he crashes into the wall. Jackie throws the knife into the wall, right next to Man-Wolf.

Still furious with Jackie, Man-Wolf runs back in the ring, but Jackie uses Kanashibari no Jutsu (Binding Technique) to freeze him in his place. Kuririn wonders how he’ll turn him into a human without the moon as Jackie calls him over. Jackie positions Kuririn facing backwards in front of Man-Wolf, and Kuririn realizes he’s going to use his head as a replacement for a full moon, and mentions Goku might transform as well. But Jackie uses hypnosis on Man-Wolf, making Kuririn’s head look like the full moon to him, and he turns back into a human. Man-Wolf is so happy. He thanks Jackie and then runs off to be a skirt chaser. Jackie thinks he would have been better off as a wolf (since he’s so ugly). “Now then, next we’ll begin the third match!! It’s Chiaotzu versus the full moon-headed Kuririn!” Kuririn is none too thrilled with that label. 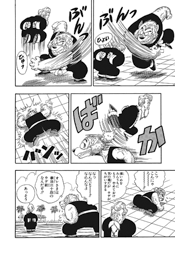 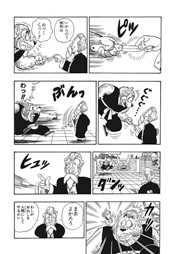 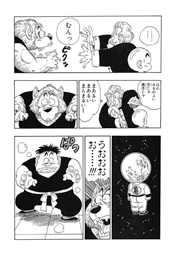