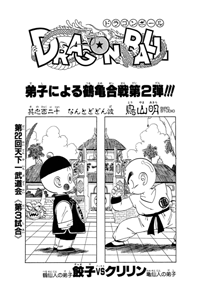 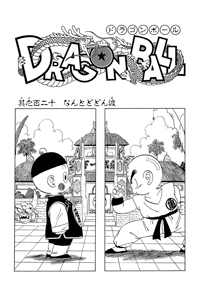 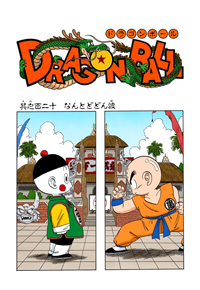 The announcer says that Kuririn is a student of Kame-Sen’nin, and Chiaotzu is a student of his rival, Tsuru-Sen’nin. “Well then, please begin!!” Kuririn takes a fighting stance, but Chiaotzu stands unmoving with no expression on his face. Kuririn wonders what’s going on, and then Chiaotzu slides forward and kicks Kuririn into the air. Chiaotzu flies up and swings at him, but Kuririn back flips back to the ground, then he kicks off the ground and comes swinging back up at Chiaotzu. Chiaotzu dodges and Kuririn flies over him, then Chiaotzu floats down to the ground.

Kuririn comes down again and kicks off the ring, dashing at Chiaotzu, and then Kuririn vanishes. Tenshinhan yells to watch out on the left, but Chiaotzu has to think which one that is. By the time he figures it out, Kuririn reappears and slugs him in the face. Kuririn gets in a few good hits, and then Chiaotzu flies backwards and up into the air. Jackie recognizes that as the Tsuru-sen Style’s signature technique, Bukūjutsu. Tenshinhan’s impressed with kisama‘s (very insulting “you”) knowledge, and Goku says to not say kisama, but “Gramps”.

Kuririn wonders what to do, and Chiaotzu tells him he’ll surprise him with this attack. Chiaotzu holds up one finger, and it starts to flare up, then he fires a Dodonpa down at Kuririn. Kuririn jumps out of the way and Chiaotzu keeps firing off a bunch more, that Kuririn also barely dodges. Goku recognizes it as Tao Pai-pai’s technique, and Tenshinhan asks Goku about this. Goku says he defeated Tao Pai-pai, and after some doubt, Tenshinhan thinks about Tao Pai-pai and walks away. Jackie asks if he really did take out Tao Pai-pai, and Goku assures him he did. Then Jackie tells him Tao Pai-pai is Tsuru-Sen’nin’s little brother.

Kuririn keeps jumping out of the way of the multiple Dodonpa that Chiaotzu keeps firing at him, and is annoyed that Chiaotzu’s not using his hands and feet. Meanwhile, Tenshinhan makes his way through the crowd to Tsuru-Sen’nin, and says he has something to tell him. Kuririn thinks about using a Kamehameha, but remembers what happened with Yamcha. He prepares to use it, but then another Dodonpa comes his way. Tsuru-Sen’nin’s shocked at what Tenshinhan has just told him, and yells out for Chiaotzu to take this guy out. So, Chiaotzu prepares to fire off a really powerful Dodonpa down at Kuririn. But then Kuririn calls out “Ka…me…ha…”, and Jackie can’t believe he can also use the Kamehameha. 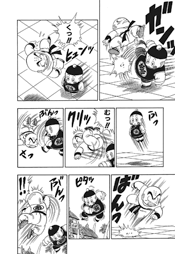 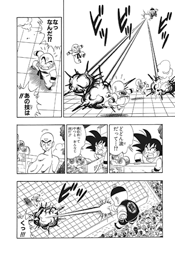 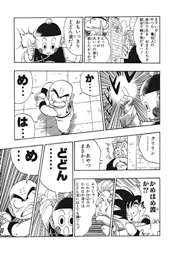