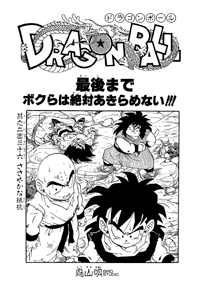 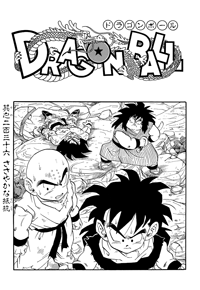 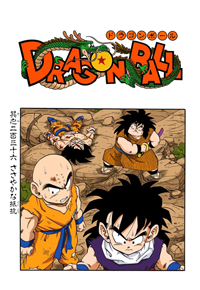 Kuririn is elated Yajirobe did such a thing, while Yajirobe is scared and hiding behind a rock. Gohan is still freaked out and doesn’t know what’s happened, and Vegeta gets pissed and screams that he’ll kill all of them. He charges toward Gohan, but then stops right in front of him, punching him in the gut. Gohan falls forward clutching himself and Vegeta prepares to attack him again, but Kuririn flies in. However Vegeta knows he’s coming and turns around, kicking Kuririn into a nearby rock formation. Vegeta mocks him saying he couldn’t wait his turn, as Yajirobe looks on, scared.

Vegeta turns his attention back to Gohan, and tells him to get up and make this more fun. Vegeta then picks him up by the shirt and thinks he’s trash. He head butts Gohan hard, noting that apparently even trash has red blood. Vegeta decides to be kind and have him die right next to his father, and throws him up next to Goku. Goku tells Gohan that he can’t move, so he asks Gohan to please fight for him. Gohan says it’s no use, he’s too strong. Vegeta decides it’s time to finally kill Kakarrot, followed by Kakarrot’s brat, the bald bastard, and finally that bastard who cut off his tail. Yajirobe freaks out when he hears he remembered that.

Goku tells Gohan that even if he can’t win, he should at least hold him off. He should have more awesome power than Vegeta, and then Kuririn can finish him off. Kuririn slowly starts to get back to his feet, and Gohan says he can’t move. Goku yells at him not to be stupid and remember what Piccolo taught him. Vegeta suddenly lands knee first on Goku’s stomach, and Goku coughs up some more blood. Vegeta starts kicking Goku, and Gohan starts to get pissed. “Stop it!!!!!” Vegeta turns around, and Gohan declares he’ll defeat him.

“You’ll defeat me?”, Vegeta asks smugly. Gohan fires a blast at him, but Vegeta jumps over it. Then Gohan jump kicks Vegeta, sending him flying. Gohan flies after him, but Vegeta turns around and kicks Gohan in the face. Goku asks Kuririn if he can hear him, as Gohan and Vegeta exchange blows. Gohan is sent flying, and Vegeta says, “Don’t mess with Vegeta-sama!!” Vegeta prepares to attack him again, as Kuririn walks over toward Goku, thinking Vegeta’s just too much for them. Goku tells Kuririn he wants to pass the Genki-Dama he gathered from the Earth over to him. 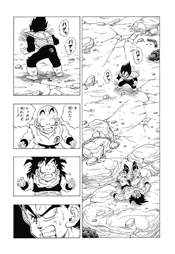 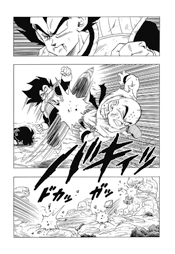 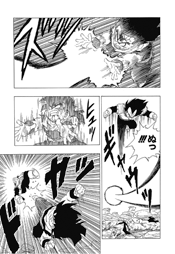