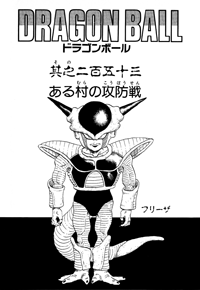 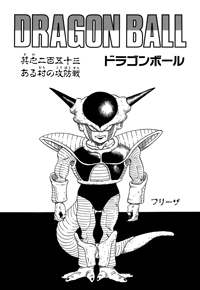 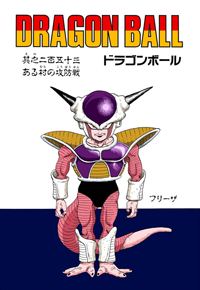 The three angry Namekians come into the village and notice the two older Namekians are dead. One man says he had a bad feeling and Freeza says they have taken a break from work to come get killed. Another of the men says he had heard a rumor that someone was coming to the villages and taking the Dragon Balls, so it must be true. The third man gets further angry at them stomping on Namek’s peace. The elder tells them to be careful, but to please fight. Freeza asks Dodoria what their battle powers are; he checks and says they are each about 1,000, so no match for them. The elder realizes those devices are how they are able to find the small villages and people on this vast planet.

The random henchmen laugh about them being only 1,000, but Kuririn and Gohan notice they are actually holding back their ki. The henchmen all rush at them, but then the men start powering up. One of the Namekians kicks a henchman into a mountain. The other Namekian punches another henchmen hard in the face, and the third Namekian blasts another guy and sends him flying over towards Zarbon. Zarbon kicks him away into the ocean, and asks Dodoria if they are really only at 1,000. Dodoria checks and says they have somehow gone up to 3,000 now. The Namekian men keep beating up all the henchmen, as Kuririn and Gohan silently cheer them on from atop the cliff.

Freeza notes that they are able to control their battle powers. The elder starts thinking about those devices again, and tells the two kids to get away. Dodoria sets down his two Dragon Balls and asks Freeza if he can get rid of those three, who tells him to do as he likes. The elder suddenly fires a little ki blast at Dodoria’s scouter and blows it up. Dodoria laughs and says an attack like that will not defeat him. The elder then jumps up into the air and starts firing more ki blasts down, destroying the scouters of all the defeated henchmen as well. Zarbon realizes he is targeting the scouters and Dodoria screams that he will kill them all. 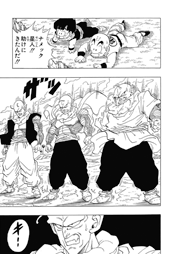 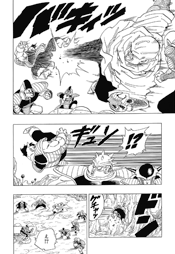 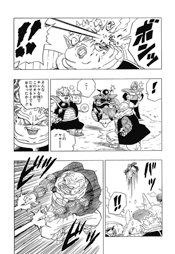