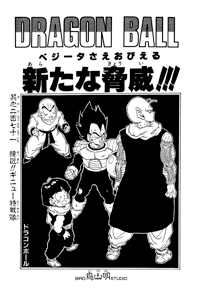 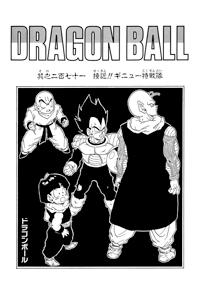 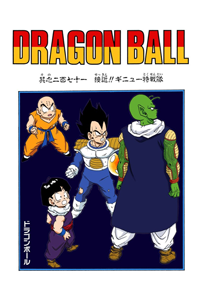 They’re Closing In!! The Ginyu Special-Squad

Vegeta feels two ki, Kakarrot’s son and the little bald guy, but they’re not headed his way. So he decides to go off after them, but takes the One-Star Ball with him, in case that woman who was with them uses that Dragon Ball-tracking device to locate his stash. With that, he zooms off. Meanwhile, Kuririn tells Gohan it’s just a little further, and thinks of how Gohan will probably rival Vegeta when his dormant power is brought out. Then as the tall mountain with the Eldest’s house on top comes into view, Kuririn suddenly feels a ki behind them… it’s Vegeta! Kuririn tells Gohan to go to see the Eldest while he holds Vegeta off, and Gohan reluctantly obliges. Vegeta then catches up to Kuririn, and tells him to give back the Four-Star Ball that he stole. Kuririn doesn’t say anything, and Vegeta says that if he’s going to play dumb, then he’ll just have to make him talk. He then notices that Kakarrot’s son went over to that mountain, and thinks that must be where they’re hiding the Dragon Balls. Kuririn yells that it’s not, but Vegeta just flies around him and towards the mountain.

The Eldest has his hand on Gohan’s head, and comments that Gohan has tremendous latent abilities. Gohan asks him to please hurry, and Nail notes that someone has come here. Vegeta walks around outside the house, and Nail steps outside and tells him to leave. Gohan then gets his power-up, and Kuririn and Vegeta both feel it. Vegeta thinks that this new ki must be Kakarrot, and yells at him to come out. But when Gohan steps outside, Vegeta freaks out, and wonders what went on in there for him to have suddenly increased in power so much. The Eldest then tells Dende to go tell everyone that large powers are approaching Planet Namek. Dende goes outside and tells them all that the Eldest said someone is nearing the planet. Kuririn notices it, and wonders if it’s Goku, but Gohan says there’s more than one. Vegeta suddenly freaks out and says it’s the Ginyu Special-Squad. Five of them, so there’s no mistake.

Vegeta grabs Gohan and demands that he hand over the Dragon Balls, but Gohan says he can’t do a thing like that. Vegeta promises he won’t lay a hand on them once he’s immortal, but Kuririn thinks it’s a trick. Vegeta says to listen to him. The five people on their way are all each much stronger than him, and they’re bringing new scouters so that Freeza can hunt down and kill them all. Vegeta says the only way to go is for him to get immortality and defeat Freeza and his men. Nail says that Vegeta is probably telling the truth, inasmuch as there are indeed five great, evil powers approaching. Kuririn asks why Gohan can’t be the one to receive immortality, but Vegeta says he doesn’t have the necessary skill or experience. Kuririn asks what will become of their wish to revive their friends, and Nail tells them that the Dragon Balls grant three wishes. Vegeta yells at them that there’s no time to waste, and so they all fly off. The Eldest tells Nail he should go as well, and says not to worry about him. Meanwhile, five space pods approach Planet Namek… 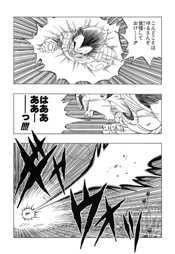 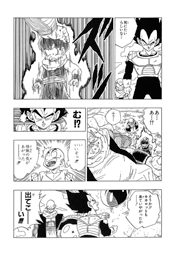 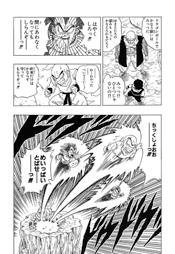