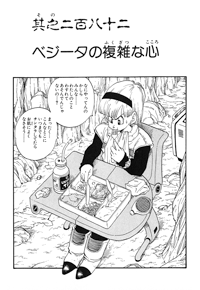 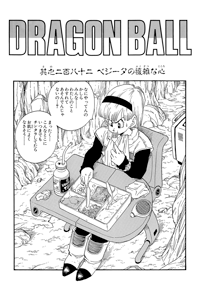 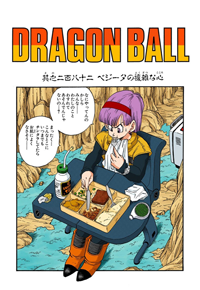 Bulma is eating some food in the little canyon where they left her, and she wonders if everyone is off playing and forgot all about her. Meanwhile, Jheese yells out, “Behind you, Butta!!!!” Butta turns around, and he can’t believe Goku is there, as he’s supposed to the fastest in the universe. Goku says maybe he’s the second fastest. “What the hell… On top of deflecting my Crusher Ball, he got behind Butta… It’s like a bad dream or something…” Butta asks Goku who the Hell he is, and Goku says, “I’m a Saiyan who grew up on Earth… it seems…” Butta tells him to cut the crap, as Saiyans shouldn’t be that fast, so Goku says it must be from his awesome training. Butta tells him he can’t win with just speed and starts striking at Goku. Goku manages to dodge each attack, and then Jheese joins in as well. Goku soon decides to show them that he has more than just speed…

Goku appears behind Butta and kicks him off into the distance. He then flies above Butta and elbows him down towards the ground. But Goku gets to the ground first and catches Butta, then tosses him aside. Goku yells out to Jheese to stop this pointless fight. He says that this guy and the other one aren’t dead, so he should quickly take them and leave this planet. Vegeta asks Kakarrot what the Hell he’s doing, and says he should finish them off. Goku responds that they can’t even move, so there’s no point in killing them. Jheese can’t believe what’s become of the Ginyu Special-Squad, five of the most super elite warriors in the universe. He starts freaking out and flies off, but Goku isn’t concerned. Kuririn asks him if he’s really Goku, as Vegeta lands knee first on Butta’s neck, killing him. He then sends a ki blast toward Rikuum, blowing him up. Goku can’t believe he killed them, but Vegeta just tells him he’s naive, and scolds him for letting one of them get away. “It seems as though you haven’t completely become a Super Saiyan…” Goku wonders about this Super Saiyan thing, and Vegeta tells him that no matter how strong he is, he absolutely cannot win against Freeza like that. “You don’t understand Freeza’s ferocity at all!!!” Speaking of whom, Freeza is approaching the Eldest’s home… 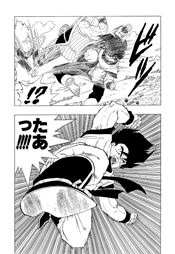 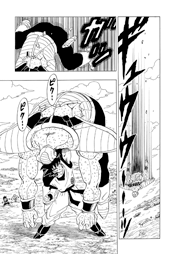 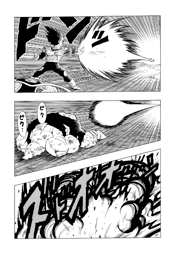