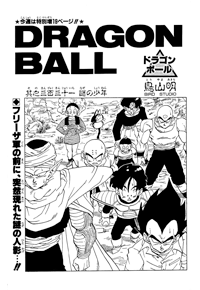 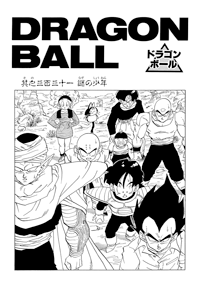 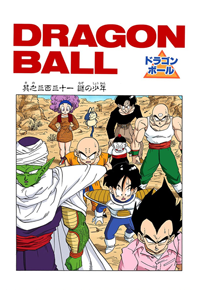 Freeza asks the Earthling what he wants. It’s a teenage boy with a surfer cut, a jean jacket with a Capsule Corp patch, and a sword strapped to his back. He says he’s come to kill them. Freeza thinks he doesn’t realize what he’s saying, but the kid knows alright, he’s Freeza. Freeza is a bit surprised, then says he’s honored that his name is known on an out-of-the-way planet in this galaxy. But they must not know he’s the strongest in the universe, so he tells one of his henchmen to get rid of this kid, and the other henchmen can finish off the Earthlings. The henchman sets up his wrist gun, and says he’s scum with a battle power of only 5. He shoots his gun, but the kid swats the blast away, and then zooms over and elbows the henchman, sending him crashing into the side of the ship. The rest of the henchmen rush at him, but the kid pulls out his sword, and in the blink of an eye, they’re all cut down.

Vegeta, Kuririn, and everyone else all feel something, and Bulma asks what it is. Kuririn says a huge ki has suddenly appeared, and lots of other ki have just disappeared. Something is happening beyond those mountains. King Cold thinks the kid did well, and Freeza says for an Earthling maybe. The kid says it’s their turn next, they’ll be killed by him in a moment. Freeza thinks he’s unique. The kid says he’s not as kind as Son Goku, and Freeza remembers that’s the Super Saiyan’s name, and figures the kid is on his side. The kid says he’s never met him, he just knows of him. And he knows what they said about killing all the Earthlings until the Super Saiyan arrives. Freeza says that since he’s killed all of his henchmen, he’ll have to do that himself. The kid says he’s made an error. Freeza says he can definitely take care of all the Earthlings himself, but the kid said that’s not it.

“Your error is… Son Goku isn’t the only Super Saiyan… There’s one here also…!!” Freeza and his father look shocked, and the kid starts powering up. Then he’s glowing, and his hair is blonde and sticking up. The others all feel this, and Gohan says it’s his father, since he has the same ki as his father did. Freeza fires a huge blast at him, which creates a huge explosion, creating a mushroom cloud. However, the kid is out of the way, safe atop a nearby mountain. Freeza thinks he’s finished him, but then the kid does some fancy hand motions, and fires a blast down at Freeza. The blast was just a distraction, and the kid comes down from above and slices Freeza in half with his sword. 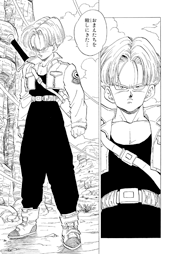 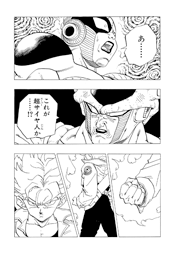 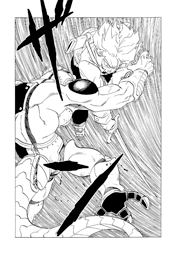