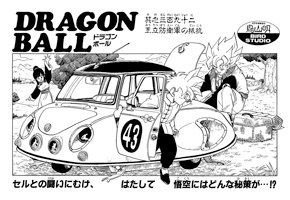 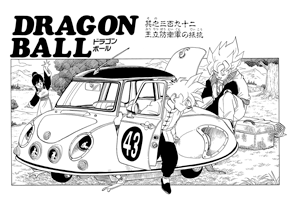 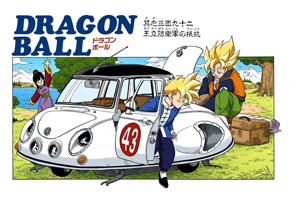 Goku, Gohan, and Chi-Chi are having a picnic next to a lake, and Goku points out a huge fish in the lake. Gohan asks if it’s okay to be this carefree, and Goku tells him not to worry, it’ll probably all work out. Gohan doesn’t like the “probably”, but Goku assures him they can win, so there’s no point in training anymore. Chi-Chi tells them their lunch is ready, so they go to eat. Some time passes, and then they’re driving down a road. Goku says that all the shops are closed, and Chi-Chi says it’s because they think they’re all going to die in seven days, so they’re not working. Then a newsman comes on over the radio, and Goku says there’s someone working. The newsman says the Royal Army is on its way to 28 KS Point 5 to attack the monster called Cell. Goku yells at them to stop, since they’ll just be killed.

A bunch of tanks, planes, and soldiers approach Cell’s ring, and the foolish army has arrived. Cell flies out of the ring, and someone says he’s getting away. Cell lands on a nearby mountain, thinking he just doesn’t want his ring to get destroyed. Someone yells not to let him get away, and to start the offensive. A bunch of tanks and missiles are fired at Cell, and Goku’s family is listening to the play-by-play on the radio. The commander calls for the attacks to cease, as they’ve done enough. But, when the smoke clears, Cell is completely unscathed. Everyone tries to retreat, but Cell just waves his hand, and blows them all up. Cell thinks that was a waste of time, as Goku turns off the radio. Goku tells Chi-Chi and Gohan to go home, he has business with Piccolo. He then steps out of the car and teleports away.

When Goku arrives at God’s Palace, the first thing he asks is if Piccolo has been in the Room of Spirit and Time too (Vegeta must be in there now), since his level has gone way up. Piccolo says that he has, but he doubts he’s any match for Cell and Goku affirms it. Piccolo smirks and says he’s really blunt, and then asks why he came here. Goku asks Piccolo if he and God can split again now that they’ve reunited, since he wants to return all the people that Cell killed back to life. Piccolo says no, they’ve split once and can’t do it again. Goku had figured not, and then says he wants to find the planet the surviving Namekians went to. Surely someone there would be willing to come to Earth. Then they’d have another God, and the Dragon Balls would be restored! 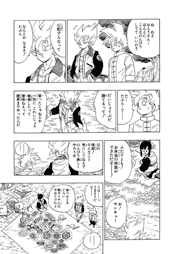 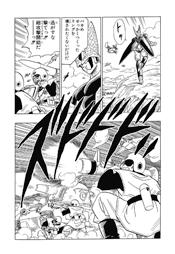 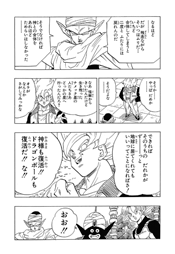