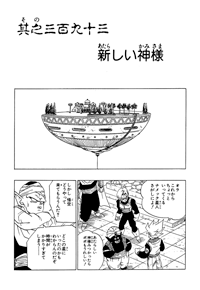 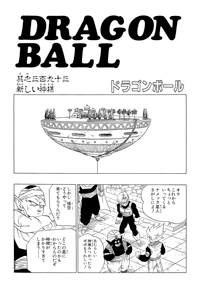 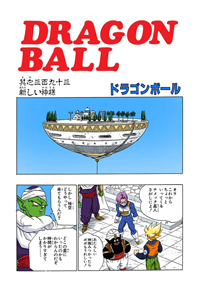 Goku says he’ll go search for the Namekians now, and Mister Popo says he’d also be happy to have a new God. Piccolo asks Goku how he’ll get there though, since they don’t know what planet they went to, and their time is limited. Goku says he has Shunkan-Idō, and he’ll just search for people with a ki like Piccolo’s. Piccolo asks if he can really seek out ki that far away, and Goku thinks so. Goku searches, but then says he can’t after all. Goku wonders if he could find them from Kaiō’s place, though, and teleports away. Meanwhile, everyone at Kame House is watching TV, and the King is coming on. “As we broadcasted sometime ago, the army, who concentrated all of its effort, was hit with a destructive attack from Cell. I take full responsibility. That was truly inexcusable; it wasn’t the way to go. Honestly, I don’t know what more we can do. However, please do not get into any kind of panic. I believe that a savior, like the boy who defeated Piccolo Daimaō long ago, will appear once more! Let us pray, to God.” Kuririn notes that God is gone.

Goku has arrived at Kaiō’s planet, and he says hello to Bubbles. Then he goes to Kaiō, who’s sleeping on a lounge chair. Kaiō asks why he came here, and Goku realizes he doesn’t know all the incredible stuff that’s happening to the Earth. Kaiō says the region he rules over is vast, and he can’t just watch the Earth. Goku brings up how he was napping in spite of this, and Kaiō yells at him to just tell him what’s going on. Goku says, “Well…” and Kaiō freaks out. Goku says he hasn’t said anything yet, and Kaiō says, “Oh yeah. Hurry up and talk.” So, Goku explains everything, and ends with how he needs to find the planet where the Namekians are. Kaiō takes this all in, saying crazy things are always happening to Goku, one after the other. Goku says it would really help if he’d point him in the direction of the Namekians new planet.

Kaiō sits still and concentrates, while Goku tells him how Mister Popo is lonely and everything. Kaiō yells at him to be quiet so he can concentrate. Goku holds his hands over his mouth, until Kaiō finds them. He points in the direction and Goku concentrates, facing in that direction. Kaiō realizes he’s learned Shunkan-Idō from the people of Yardrat, and says what a useful technique it is. This time Goku tells Kaiō to be quiet. Then Goku finds it, and teleports away. He arrives on the new Planet Namek, and they’re surprised to see him. He says there’s lots of Piccolos. Muri asks who he is. Goku says he’s called Son Goku, and he’s from Earth. Muri gets excited, knowing that he was the one who fought Freeza and rescued them. Goku nervously says yeah, but Planet Namek exploded.

Goku finishes explaining everything to them, and how he needs someone to come to Earth and be their new God. Muri says there’s someone here who would do that, and calls Dende over. Dende comes up to them, and Muri says how he’s always saying he wants to go to Earth and hang out with Gohan and Kuririn. Goku wants to know if he can make Dragon Balls though, and Muri says he’s an excellent member of the dragon clan. Goku thinks that’s great, and says hello to Dende. Goku thanks them all, and Dende says goodbye to everyone. Then they teleport back to Kaiō’s, just to say it went well, and then straight to God’s Palace on Earth. Piccolo is surprised to see Dende, and Goku tells Dende to wait here while he goes and gets Kuririn and Gohan.

Kuririn happens to be watching TV at Kame House with Yamcha. A reporter says the world fighting champion, and superhero, Satan, will be appearing at the Cell Games. The reporter asks Mister Satan if he’ll be alright, since Cell did wipe out the army. Satan says that was just a trick involving explosive powder, and calls Cell an amateur. He goes on to threaten to beat up that crazy, bluffing bastard, and the crowd cheers for him. Kuririn and Yamcha are unenthused, though. Then Goku arrives, and asks Kuririn to come with him. He’s brought the new God, his name is Dende. Then Goku arrives at God’s Palace, and Dende, Kuririn, and Gohan are all excited to see each other. Trunks wants to ask Goku one thing: the reason he’s so calm now is because he’s found a weak point in Cell, right? But Goku doesn’t think Cell has a weak point. 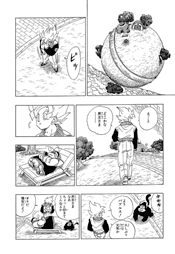 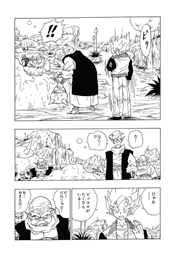 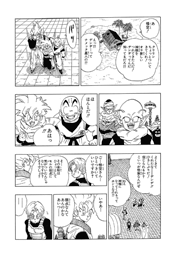