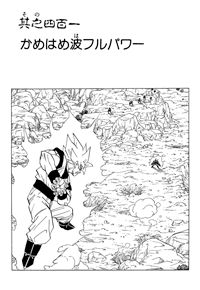 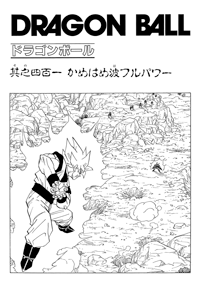 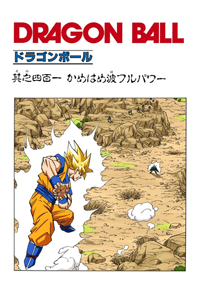 Goku is still mid-air, aiming down at Cell, and Piccolo wonders if he really intends to fire that full power Kamehameha. Kuririn thinks he won’t, since the Earth would get blown up, and Cell doubts it too. Goku doesn’t halt, and Cell and Vegeta both realize he does intend to fire it. But then Goku suddenly teleports and appears right in front of Cell, and he fires the Kamehameha full on. Cell is blown away, and when the smoke clears, Cell’s headless, armless body is laying on the ground. Yamcha gets really excited, but Trunks and Kuririn don’t. Satan thinks he did fairly well. Goku thinks Cell still has a lot of ki left for being in that condition, and Kuririn yells that Cell will probably revive himself.

The remains of Cell hops back to its feet, then sprouts out a new head and arms and everything. The announcer and Satan freak out, while Goku realizes he can regenerate himself. Cell says just like Piccolo. Goku didn’t think he could really win so easily, but at least now Cell’s ki has dropped a lot. Cell notes that Goku’s ki has also dropped a lot, and he’s breathing hard. Cell advises Goku not to do anymore pointless attacks, so he doesn’t use up his strength and make the fight boring. Goku agrees, and charges at Cell with a punch, but Cell dodges. Goku blocks a kick, but then takes a hit to the face. 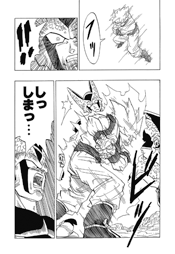 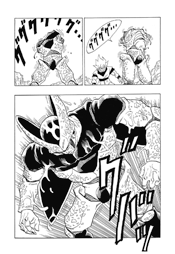 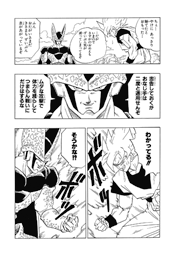