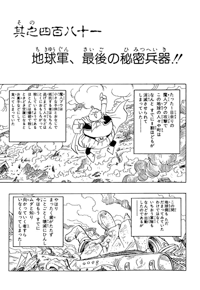 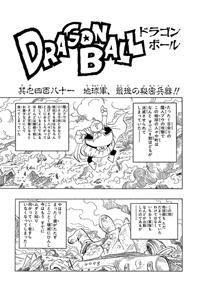 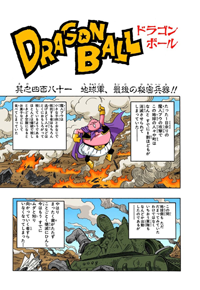 “In one day, Majin Boo has destroyed 80% of the Earth’s people and cities. Like a child, Majin Boo thinks it fun when people try to resist him or run away. Most people were killed by explosion, but sometimes when he’s hungry, he turns people into candy to eat them up. But the Earth hasn’t just watched in silence. The army has made a move, but of course, they couldn’t compete at all. Now, everyone knows that it’s all futile, and there is only one they can turn to… However, the remaining people haven’t completely given up hope. They know via radio broadcasts that a savior has survived. Everyone is awaiting the awakening of that savior…”

“Yes. The champion who has been resting in shelter up until now, in order to heal of the fatigue from the Tenka’ichi Budōkai… The one who overpowered Cell… The strongest in the world, no, the universe! Now… The Earth’s most famous and legendary man has awaken. And so, he is finally going to stand up to Majin Boo. Bearing the hope of the few remaining people upon his shoulders… Yes! The strongest warrior, boasting myth-like invincibility… Mister Satan has at last taken action!!!” The Royal Army has flown Satan to a safe distance from Boo’s house. One of the officers asks about Satan’s duffel bag, and he replies that it’s full of his secret weapons.

Satan throws off his cape and belt, and then calls out Boo in a very quiet voice. The guy thinks Satan’s throat must be sore, and so he yells out at Boo for him. Satan calls him an idiot and says Boo will hear that, and ducks behind a rock. But, Boo doesn’t come out, and Satan tells them to hurry up and leave. Once they’re gone, Satan sneaks along stealthily, holding up a small shrub in front of his face. Once he gets close enough, he tosses a small rock at Boo’s house, but nothing happens. Satan creeps along the outside of the house, peeping into the window to see that it’s empty. Satan then becomes brave, and starts making fun of Boo, since he’s not actually here. Suddenly, there’s a noise behind him and Satan drops to his knees, vehemently apologizing. But, it turns out the noise was just a lizard. Satan is mad that he did all that just because of a stupid lizard, and so he stomps on it.

Suddenly, Boo appears on the roof, and Satan bows and humbly greets him when he comes down. Boo asks what he wants to be turned into, hard candy? A biscuit? A gummy? Satan asks him to hold up, since he has some lovely presents for Majin Boo. Satan says it’s nothing much though, and Boo thinks he’ll just kill him then. Satan quickly retracts this, saying it’s high class chocolate. Boo isn’t sure what that means, and so Satan explains that it’s very expensive, and very delicious. Boo takes a piece, sniffs it, and then eats it. Satan devilishly grins, thinking of the deadly poison he put in the chocolate. But nothing happens, and Boo says it’s even yummier than human chocolate.

Satan’s next present is a GamePoy, and he shows Boo how to play with it. Boo starts to get frustrated because it’s too hard, and so Satan gives him an easier game. Satan runs away while he plays it, and then sets off a trigger he’s holding. “Boom!” The GamePoy explodes, and Satan says that’s “the end”. But, Boo survives, and thinks that was a fun game. Since Satan is fun, Boo decides he wants to make him into a servant. Satan is grateful, and Boo offers him some human candy balls. Satan reluctantly starts chewing them up, saying they’re delicious, but then does the “hey look over there” thing and spits them out. Satan then gets Boo to stare off at something else, and while he’s distracted, Satan elbows him in the back of the neck. Boo doesn’t even notice and asks what he’s looking at. Satan says he had seen a shadow. Boo says he’ll kill it, and shoots a big blast out into the distance.

Satan tells Boo he did very well, and thinks they should get their picture taken together. He tells Boo to lye on the ground, as it’s the latest fashion, and then Satan stands over Boo’s body for the photograph. Satan thinks that at least he’s gotten a good picture out of this. The two go inside, and Satan serves Boo some food before washing his back in the bathtub. Satan hates doing all this, but he’ll think of a way to kill Boo yet. 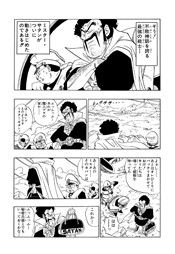 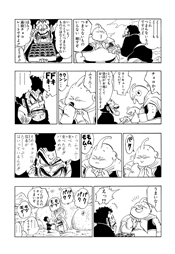 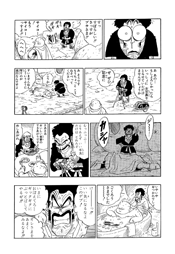