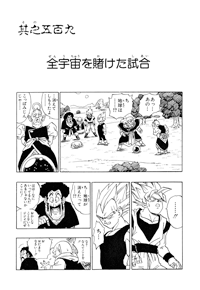 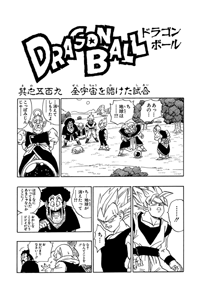 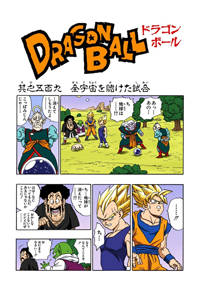 A Match with the Whole Universe at Stake

Looking into their crystal ball, the Kaiōshin confirm that the Earth is completely gone. Satan thinks that’s funny, and the geezer is talking crazy. Dende tells him (nicely) to hush, and begins explaining how important the Kaiōshin are, and that this is the holy land of the Kaiōshin Realm, not Earth. Satan thinks this is just all a cruel joke, and doubts Dende is even God. Satan then realizes that this must all be a dream, and that Majin Boo isn’t even real. And since this a dream, he must also be able fly, and so he jumps off a small cliff… Satan thinks this is a pretty painful dream. Vegeta is still angry that Kakarrot saved him instead of their comrades. Vegeta also notes that now the Earth and everyone dead can never be restored, because the Dragon Balls are gone.

Old Kaiōshin freaks out, as only Namekians are allowed to have Dragon Balls. Then Dende gets an idea. “I think if we go to my home world of Planet Namek, the new Eldest would surely have made another set of Dragon Balls!! It can all be restored!! The Earth and everyone that was killed by Boo!!!” Goku says Planet Namek is too far away, and he can’t feel any Namekian ki, so he can’t teleport, and they don’t have a spaceship either. Kaiōshin insists that he can teleport to any of the planets in the lower world. They’ve seen it before, it’s Kibito’s signature technique.

Everyone gets excited, but Old Kaiōshin says he won’t allow this. Goku offers to take a steamy perverted picture of a girl for him. She’s not exactly young, but she’s puri-puri. Old Kaiōshin isn’t too keen, since she’s probably dead, which Goku says is why they need the Dragon Balls to bring her back to life. Vegeta wants to know if the woman he means is Bulma. He yells at Goku for doing that with someone else’s wife, instead of taking a picture of Chi-Chi’s breasts. Goku says Chi-Chi’s not puri-puri, and she’d kill him. Kaiōshin suddenly points out that Boo is reforming in the empty space that was Earth.

Old Kaiōshin tells him to give the Potara to them, but Goku says they don’t need it. “Well, he really is beyond our means… It’ll be tough, but… I want to fight with my own power alone. Sorry to do this at such a bad time… But, he can’t fuse with anyone else either…” Old Kaiōshin is shocked, but Vegeta thinks that was well said, and crushes his own Potara, saying that’s how Saiyans are. Goku says it’ll be okay, because Boo won’t come here, and they can think up a plan in the meantime, though it may be unfortunate for all the aliens Boo will kill. However, Boo suddenly smirks and teleports to the Kaiōshin Realm.

Goku realizes Boo saw Kaiōshin’s Shunkan-Idō, and mimicked it that quickly. Vegeta thinks they’ll just have to end it now. Goku asks Kaiōshin to please take the others to another planet. The Kaiōshin wish them luck, and Goku gives a thumbs up as they teleport away with Dende and the puppy, arriving on a planet with healthy grass and tall trees. They’ll still watch via the crystal ball, which Old Kaiōshin sets on a nearby log. Goku and Vegeta decide it’s time to begin, and start playing rock-paper-scissors to see who’ll fight first. Goku wins, and so Vegeta angrily drops out of Super Saiyan and walks off to watch. Goku says he’s going to go full-throttle, for the entire universe, and Vegeta is glad, since he wants to see Super Saiyan 3 with his own eyes. Goku tells Vegeta he might not get a turn in that case, noting he could have beaten the fat Majin Boo earlier, but he wanted the youngsters to do the job.

Boo isn’t listening, and is, in fact, asleep. Goku then becomes Super Saiyan 3 and the rocks that fly up hit Boo, waking him up. Boo then howls and beats his chest like an ape. Goku thinks he’s a weirdo. Kaiōshin realizes they left the human called Satan back in the Kaiōshin Realm, but Old Kaiōshin doesn’t care, leave him there. Satan is watching the battle from behind a small rock. 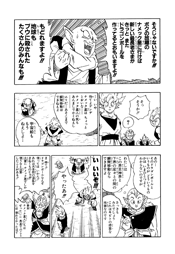 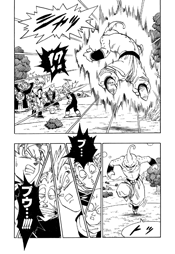 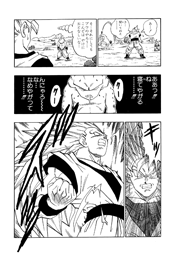