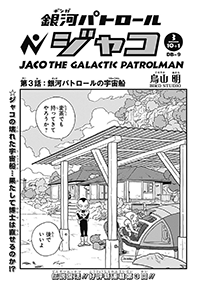 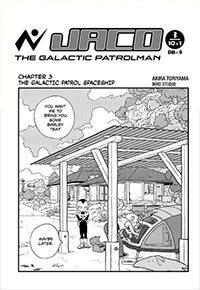 As Omori continues his examination of Jaco’s unbelievable spaceship, he asks if it is difficult to become a member of the galactic patrol. Jaco explains that they operate under the direct orders of the Galactic King, and that only a select few are chosen for such a role. When Jaco was applying, nine individuals applied for five open spots. Omori figures those odds are not too impressive, but Jaco mostly ignores him and explains how the mark of the patrol is admired by all, and feared by criminals!

Omori does not fully understand the spaceship, but seems to have a rough idea of what might be wrong. It seems that the ship generates power by shooting a beam at a specific substance, but that substance broke off when Jaco hit the moon. Omori pulls out a fragment of what was likely the special substance and heads off to analyze it. If Earth has any, Jaco should be OK… but if not, he should give up all hope of ever leaving. Jaco says his communicator was busted, too, so he cannot even call for help! Omori suggests that Jaco wander around the island while he works inside.

Jaco takes a look around but then jumps off to explore. After posing and messing up an otherwise cool display of a quickdraw, Jaco wanders back to Omori’s place for some milk. After a quick drink, Jaco wanders over to the television and turns it on to find a news program talking about the special spaceship launch coming in two days. Three of the rockets apparently failed in testing, but there seems to be enough confidence in the project thanks to involvement from the idol singer Azuki. She breaks into a pop song, which seems to thoroughly disgust Jaco… who wanders outside and still ends up muttering the catchy song to himself.

Omori comes running up to Jaco excited by their prospects. The substance is one that exists on Earth, after all! It is called “sky gold”, a very precious blue metal. They would need about two pounds of it, which would cost ¥76 million or so. Jaco cannot believe that Omori is suggesting he get a job to pay for all that, but Omori never actually said anything like that…

Neither Omori nor Jaco have that kind of money, so they will need some other sort of plan. Jaco explains that on a full tank, he could probably make two laps from headquarters to Earth. Omori figures that he would be able to at least get back home with a quarter of that amount, then, but that would still cost ¥19 million. As the two continue to ignore each others’ suggestions, Omori concludes that they should at least head into town for food. Jaco wants to come along to see for himself what humans are truly like, so Omori dresses him up in a hat and trench coat. East City has all sorts of weird people, so Jaco should not stand out too much as long as he keeps a low profile. 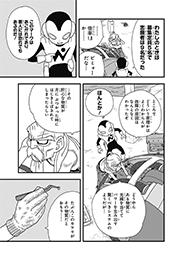