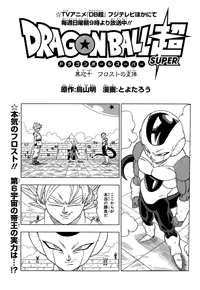 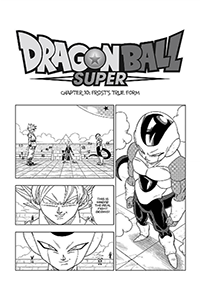 With both Goku and Frost having transformed, the fight can truly begin. Frost rushes in, though Goku confidently swipes away all incoming physical and ki-based attacks. Smirking, Goku grabs Frost’s wrists and interrupts his attack sequence, and proceeds to kick him up into the air. Frost rebounds and goes at it again as Champa watches on, seemingly annoyed. Frost attempts to push Goku back with a kiai blast, but Goku is able to withstand it and return the favor in kind.

Frost suddenly perks up and announces that Goku has far surpassed his expectations, but there is no way he will lose the fight. Frost keeps rushing back in, but Goku continues to effortlessly knock him aside, until one punch — which otherwise appears no different from the others — changes Goku’s face entirely and knocks him out of the ring.

Goku has lost and Frost has won the match! Goku is not quite sure what happened, and while everyone is surprised and impressed in their own way, Jaco seems to be the only one critically assessing the situation.

Piccolo is up next, and while Goku delivers the bad information that he does not stand a chance against Frost, perhaps he can at least wear Frost down before Vegeta enters the ring.

Piccolo dashes around to avoid all of Frost’s attacks as everyone looks on, slightly impressed. Piccolo takes off his weighted clothing and attacks with outstretched arms. With both of them burning through their stamina, Frost makes the decision to end the match. Despite Piccolo catching it, a single punch from Frost is once again all it takes to knock his opponent out of the ring.

With Piccolo’s loss, this leaves Vegeta to fight next. As he prepares to enter the ring, however, Jaco calls out an objection: Frost is using a concealed needle-like weapon! Champa threatens to rain vengeance upon Jaco if he is wrong, but Beerus demands they proceed with the investigation. The tournament referee proceeds to examine Frost’s arm, and upon finding a tiny hole, is pricked and falls over. Frost attempts to explain that it is a natural part of his body, but the referee disagrees and notes signs of bodily modification. Frost is disqualified!

Champa is furious with Frost, who just wanted to end the matches as quickly as possible. Vegeta pipes in and says there is no need to disqualify Frost: he will personally take him out. 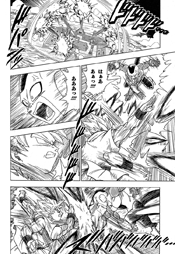 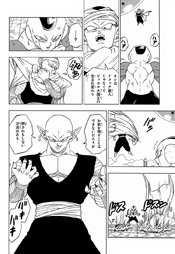 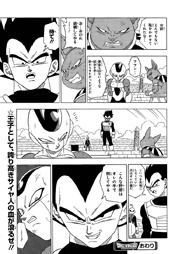