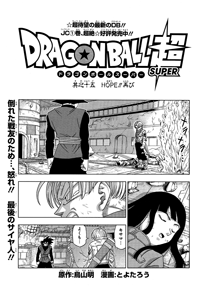 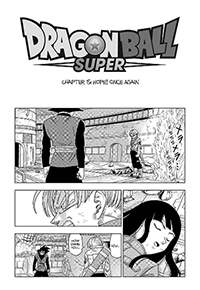 Trunks transforms into a Super Saiyan and fires a Masenkō at his enemy, ultimately using this as a distraction to jump in with a sword attack and follow-up punches. It is not enough, though, and Trunks’ opponent is able to teleport behind him with an elbow attack. Just as Trunks is about to receive his deathblow, he remembers Mai’s plea and uses the belt and sheath to knock himself away.

Just as the enemy deduces Trunks’ location, the time machine blasts out of Capsule Corporation with Trunks at the helm. The enemy fires what appears to be a Kamehameha, but Trunks disappears at the last moment to escape.

Back in the standard timeline, Beerus distracts Goku’s match with Vegeta by discussing what it is like to be a God of Destruction. Trunks’ time machine suddenly appears and crashes to the ground, surprising the entire group. Goku heads to Karin’s for a senzu, as the young man inside looks to be in bad shape. As Pilaf and friends poke at the similarity between the two Trunks, Goku returns. The future Trunks wakes up to see Goku in front of him, and in an apparent state of shock, attacks him with a punch. Goku, confused but not particularly fazed, blocks it handily. Trunks regains his senses and wonders why Goku is alive after having been blown up by Cell, though Bulma and Vegeta begin interrogating Trunks over what has happened. Beerus and Whis make the connection that this person is also named Trunks, which means humans have indeed been meddling with time travel. Goku wonders if this was an attack from Boo, but Trunks explains that Kaiōshin lent a hand to defeat Dabra and Bobbidi in his time to prevent Boo’s resurrection. At this point Beerus and Whis interject, and Bulma is forced to explain that her future self is the one who created the time machine. Unconcerned with these details, Vegeta demands to know more about the enemy in the future timeline. Trunks explains that this person is obsessed and has been eradicating humans on multiple planets in his strange sense of justice; even the future Bulma has been killed by this person, who appears to look almost exactly like Goku! The future Bulma dubbed him “Goku Black”; Beerus has no idea what is going on, but Goku and the others want to help. The time machine happens to run on the fuel source that present-day Bulma is developing right now; it will take a day, but they will be able to refuel the ship.

Trunks is still concerned over the strength that “Goku Black” seems to have, so Goku suggests a sparring match for comparison. Trunks transforms, surrounded by lightning sparks, which prompts Goku to congratulate him and do the same. Beerus comments that they are both fighting in their “Super Saiyan 2” forms, and Whis seems to think Trunks may actually have the upper hand. Goku amps up to Super Saiyan 3, and while Trunks is impressed at the new form, powers up on his own, impressing even Vegeta. Trunks blasts in for an attack, but in a split-second he is kicked from behind down to the ground. Beerus snickers, noting that Goku briefly used his God form. Trunks explains that even with this power, he was no match for this “Goku Black” enemy. Goku asks Beerus to come along, who declines and wonders what the God of Destruction in that timeline is doing letting this maniac run loose. Trunks has no idea what a “God of Destruction” is, which manages to pique Whis’ interest. If the Kaiōshin helped out, what happened after that? Trunks explains that the Kaiōshin lost his life in the battle. Beerus loses his cool entirely as Whis explains that the God of Destruction and the Kaiōshin are linked; if one dies, so does the other, meaning that there is no longer a God of Destruction in Trunks’ timeline…! 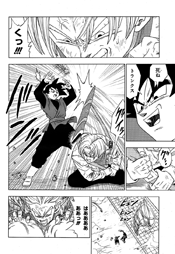 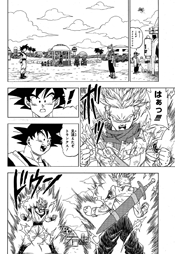 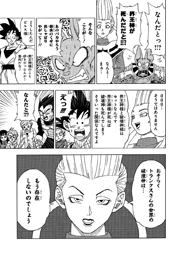