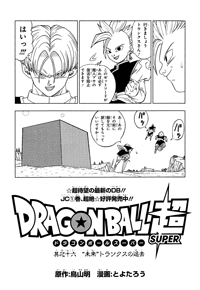 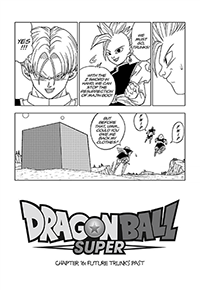 Several years ago, in the future Trunks’ time…

Kibito and Kaiōshin watch over Trunks as he trains with the Z-Sword. Just as Kaiōshin decides to wrap up their training by tossing a giant cube made of Katchin, Kibito exclaims that Bobbidi is on the move. Confident that they will be able to prevent Boo’s resurrection, the trio take off (though Trunks asks if they can restore his clothes to normal before they depart).

A wounded Kaiōshin and Kibito watch as Trunks battles Dabra, Bobbidi cackling all the meanwhile. Dabra spits on the sword, forcing Trunks to let go lest he also be turned to stone. Kaiōshin has clearly miscalculated, with Pui-Pui and Yakon only serving as decoys. It took over ten years to gather this energy, and they are not able to let anyone ruin their plan! Kaiōshin rushes in to attack Dabra, but is handily knocked back. Kibito screams out that he of all people must not die. Dabra appears in front of Kibito and blows him to nothingness as Trunks screams. Bobbidi uses his telekinesis to choke Kaiōshin.

Trunks powers up further, surrounding himself with lightning sparks. Bobbidi seems concerned, but Dabra states that Trunks is still no match for him at this level. Trunks gets in some solid hits as Kaiōshin helps with a little telekinesis of his own, freezing Dabra in his tracks. Trunks takes the opportunity to destroy Dabra with a blast. Kaiōshin relishes in the world being at peace once more and collapses as Trunks runs over to him.

Up on a cliff, Black chuckles, noting how delightful it is for there to be a world here without Universe 7’s God of Destruction…

Back in the present-day timeline, Trunks wraps up his explanation to Goku and the others, noting that it was around this point that Black appeared and began killing people. Whis comments to Beerus that he must be dead in this future timeline; very few people are aware that when a Kaiōshin dies, so too will the God of Destruction. Even among the gods, only fairly high-ranking individuals are supposed to know. Beerus wonders if Black is some kind of god, but Whis is seemingly more concerned that he can travel between parallel worlds at will. Trunks confirms that this is the first he has ever heard about a God of Destruction, and is (finally!) formally introduced to Beerus and Whis.

Bulma tells Trunks to go change his clothes since they have to wait for the time machine to charge again, anyway. Trunks meets his present-timeline self, congratulates him on already being able to transform into a Super Saiyan, and tells him to protect his friends. Trunks also meets the current-day Mai, though he does not seem to know either Pilaf or Shuu from his time. As Trunks heads off, Mai comments on how dreamy he is.

Back in the future, Black can feel how “he” truly has vanished from this world. Black wonders if all of the Kaiōshin from the other universes, along with the respective Gods of Destruction, truly have been eliminated, leaving him unopposed. Not one to underestimate a Saiyan, however, he will continue to check things out. A cat finds Mai unconscious in the rubble…

Once again in the present timeline, Goku and the others enjoy a meal as Beerus and Whis banter back and forth about the repercussions of a world without gods. This “Black” guy will presumably show up in their world, as well, and attempt the same thing.

Over in Universe 10, Kibito wraps up a sparring match with Zamasu. Gowasu explains that though Zamasu was indeed the previous North Kaiō in their universe, he is training to be Gowasu’s successor as Kaiōshin. As everyone continues to exchange pleasantries, Kaiōshin explains that they in fact did not defeat Boo alone; it was through the help of Son Goku and his friends that they were able to succeed. Zamasu is astonished to hear of these kinds of beings able to achieve the power of gods, and begins to speak of protecting the order of their respective universes.

After Kaiōshin and Kibito depart, Gowasu peeks in on the planet Babari, where the sentient race has developed but have become violent toward each other. Zamasu believes they should exterminate them now; Gowasu is shocked, believing this to be the talk of a God of Destruction. Using special Time Rings, the two could check in on the same race 1,000 years in the future.

“What future will the apprentice-Kaiōshin Zamasu see with the Time Rings…?!” 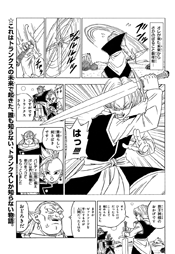 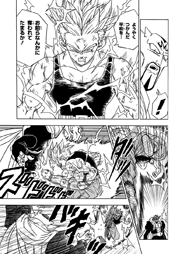 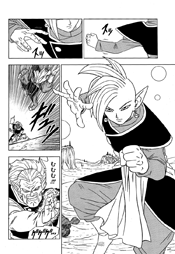