Kame-Sen’nin asks Goku if he likes Kinto-Un, and he says he does. Kame-Sen’nin says it was a gift from God. Goku’s impressed, and Kame-Sen’nin thinks the girl shrunk. Before, she had much bigger, bouncier breasts. Goku says this is a different girl, Gyūmaō’s daughter, Chi-Chi. Kame-Sen’nin ponders the fact that Gyūmaō named his daughter Chi-Chi (chichi means “father”), and thinks that her breasts would be called “Chi-Chi’s chichi” (chichi can also mean “breasts”). Meanwhile, Chi-Chi asks Goku if this is really Muten Rōshi. She wants to test him, so she throws her helmet blade at him to see if he’ll dodge. Kame-Sen’nin does turn around to avoid it with his staff, but the tip of the staff gets cut off, and the blade goes right into his bald head. Chi-Chi thinks he must not be Muten Rōshi, and he yells at her for it. He pulls out his driver’s license to prove who he is, and so Chi-Chi realizes it’s him, and pulls the blade out of his head.

Kame-Sen’nin takes Goku aside and says he’ll let them have the fan, if he can have a go at Bulma’s breasts. Umigame scolds him for that, and Kame-Sen’nin says how a dying old man should be allowed a souvenir for the underworld. Umigame says he needs no underworld souvenir, as he drank an eternal youth potion. Goku figures it would be alright to just poke at Bulma’s chest. But this must stay a secret from Chi-Chi. Kame-Sen’nin goes in and searches the house, but he can’t find the fan. Umigame reminds him he used it as a pot holder, and then Kame-Sen’nin remembers he spilled wonton soup on it and threw it out since he couldn’t clean it. Chi-Chi starts crying, but Kame-Sen’nin says he’ll go to Mount Frypan and put out the fire himself. He changes his clothes, and then calls for Ko-Gamera, who comes flying to the island. Kame-Sen’nin hops on and follows them, getting dizzy along the way. Back on Mount Frypan, Goku explains to Gyūmaō that the fan is gone, but Kame-Sen’nin is coming himself to extinguish the fire. When Kame-Sen’nin arrives, the first thing he does is vomit from dizziness. 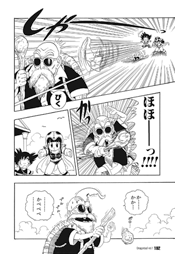 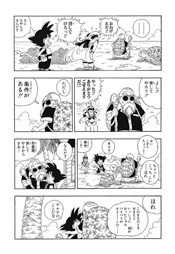 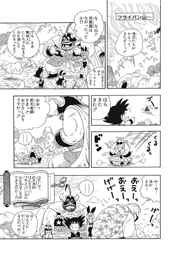