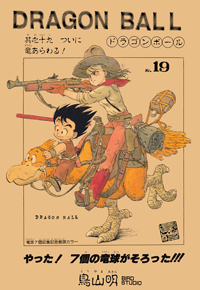 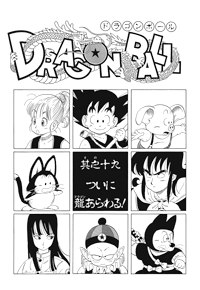 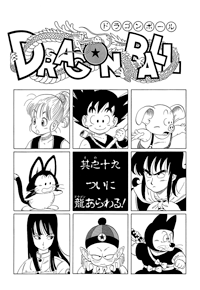 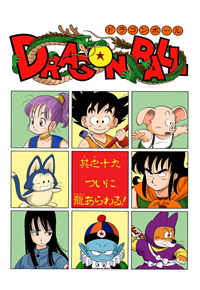 At Long Last, the Dragon Appears!

Bulma & co. realize there’s no way to escape, while Pilaf is excited about finally ruling the world. His lackeys show up, and say that they couldn’t find the missing Dragon Ball in the car. Pilaf says one of them must have the last one, and all three look at the security monitor. The woman points, saying that perhaps the man has them between his legs, causing Pilaf to scold her for such a vulgar gag. She apologizes, while holding a stick with poo on the end. Pilaf yells at her for that, too, complaining about how he wants the author to show some class in this comic, at least, and points out that right now an incredible number of people are reading copies of this issue of Shōnen Jump. She apologizes again, saying she couldn’t help it, while Soba does an airplane run (complete with sound effect) in the background.

“Hanakuso no himitsu o… sotto hanakusō!!” (“Let’s softly tell them… the secret of our snot!”) Pu’er asks Yamcha what that was, and he says it was a pun. Oolong says they shouldn’t be joking until they’ve found a way out of here, but Yamcha just tells him not to get angry when he’s trying to lighten the mood. Pilaf suddenly appears on a monitor in the wall, and introduces himself. Bulma gets angry at him for having stolen their Dragon Balls, while Pilaf is annoyed about them still having one. Goku thinks they can get out if they break that window, but Yamcha tells him that it’s a television. Pilaf continues on, telling them they should have the ball with four stars, and Bulma just sticks out her tongue. Pilaf says that if she won’t talk, then he’ll do perverted things to her, and a mechanical grabber comes through the ceiling and takes her away. Yamcha is worried, Goku doesn’t understand, and Oolong’s excited.

The grabber takes Bulma to the control room where Pilaf is, and he demands to know where the final Dragon Ball is. Bulma gives him the finger, and so Pilaf prepares to do something perverse. Bulma is scared now, and Oolong can’t wait. Pilaf dramatically blows her a kiss, and his two lackeys start blushing. Pilaf is also red in the face, and thinks she’ll be willing to talk now. Bulma can’t believe that was it. “I thought you were going to strip me naked and do hero hero, or pafu pafu, or kyoi kyoi, or inguri monguri!!” Pilaf freaks out, while his two lackeys are beside themselves with embarrassment that she is even able to say such things.

Pilaf then sends her back into the other room. Pilaf is irked at his perverted technique not working, and the woman suggests they use some sleeping gas. Gas begins to come out of the walls in the small room, and everyone passes out. A bit later, a wall opens, and Pilaf walks in to get the Dragon Ball, but he inhales the gas and passes out too. His two lackeys (wearing gas masks) come up behind him, and Soba takes Pilaf to bed. The woman, meanwhile, searches them, and finds the Four-Star Ball in Goku’s pouch. After some time, Pilaf and his two lackeys are gathered outside. Pilaf is still groggy, but he’s pleased that his henchmen have finally gotten all seven balls and his chance to rule the world is now at hand. Back inside, Goku thinks his kicks aren’t effective, and Yamcha says the walls are too hard. Yamcha then tells Goku he needs to use the Kamehameha to get them out. Goku wants to know how Yamcha knows about that, but Yamcha says that doesn’t matter right now.

The seven balls are gathered, and Pilaf stands over them, ready to summon the dragon god. Goku performs the Kamehameha, but it only opens a small hole in the wall. Yamcha looks through it, and sees that the bad guys are out there and notes that they still haven’t summoned the dragon yet. He tells Pu’er to transform into a bat and fly down there, and Bulma yells at Oolong to do the same, otherwise… Pu’er and Oolong fly towards Pilaf as he begins to summon Shenlong. “Come out, Dragon!! And grant me my wish!!!” The balls start to glow, and a huge dragon emerges from them. 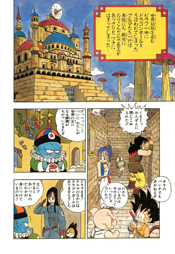 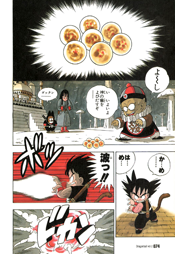 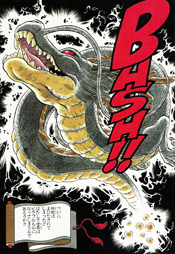