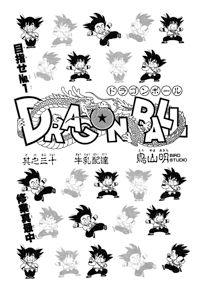 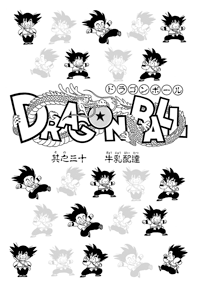 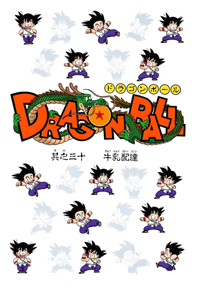 A rooster crows and inside Kame House, an alarm clock goes off. Kame-Sen’nin wakes up and yells at Kuririn to wake up. Kuririn’s disappointed to have to start training at 4:30 in the morning. Kame-Sen’nin goes upstairs, and thinks if Lunch wasn’t so weird, they could sleep together instead of him having to sleep with Kuririn. He gets in the room, and he’s jealous of Goku (who’s sharing the bed with her). Unfortunately Goku’s the only one who’s stronger than her… and he has no interest in women.

Kame-Sen’nin notices that Lunch has blonde hair and decides to wake-up Goku by poking him with a broom. Lunch then wakes up, and Goku nervously says “Ossu” to her. She gets pissed and asks why the hell he’s in bed with her, and Goku says there weren’t enough futons. She pulls a gun out from under her pillow and starts firing at him. Goku gets mad and jump kicks her in the face, knocking her out. Kame-Sen’nin pops out from the dresser drawer, and notices Goku has no hang-ups with hitting women. Goku asks if they’re up so early for training, and Kame-Sen’nin looks up (he’s sitting right next to the knocked out Lunch…) and says yeah.

Outside, Kame-Sen’nin begins explaining to Kuririn and Goku about how they’ll finally start the training of the Kame-sen Style of Martial Arts. You don’t learn martial arts for winning brawls or impressing the gals. He explains that by learning martial arts, the health of your mind and body will improve and that you’ll spend your life having fun, and you’ll always be in high spirits! However, if an enemy were to threaten yourself or righteous people with unjust power, you must attack them!!

So, the training starts, first with some light running. They come along until they get to a house, where a milkman comes out with some crates of milk. Kame-Sen’nin introduces himself and says he called yesterday. The milkman gives him a map of all the delivery spots. Kame-Sen’nin tells the boys to grab a crate; they’ll be delivering milk. The milkman offers them a helicopter instead of running, but Kame-Sen’nin says that’s not training. He then announces that they’ll skip to the first house, which 2 kilometers away.

“Skip, skip, la la la.” They make the first delivery, and the next one is 1 kilometer away. They come to a tree-lined road, and Kame-Sen’nin wants them to zig-zag through the trees. They get to the next house, and Kuririn keeps falling behind. Kame-Sen’nin says he needs to hurry, or the milk will go sour. The next delivery is up a small mountain, and they have to climb a huge staircase to get to the top. Goku gets to the top first, exhausted, and Kame-Sen’nin is already up there smoking a pipe. He tells Goku that Son Gohan and Gyūmaō used to deliver milk, which makes Goku happy knowing that his Grandpa used to do this.

Kuririn finally reaches the top, and after he delivers the milk, a guy comes out and thanks them. Goku says “Ossu”, and Kame-Sen’nin bonks him on the head and says to say “Good morning” instead. The guy asks Kame-Sen’nin if he’s training them, and Kame-Sen’nin says that they show a lot of promise. He thinks with proper training they’ll be ready for the tournament in eight months, and the guy realizes he means the Tenka’ichi Budōkai. Kuririn freaks out, but Goku doesn’t know what that is. Kuririn explains that all of the country’s martial arts masters gather to decide who’s the best in the world, and asks Kame-Sen’nin if he really thinks they can compete. Both Kuririn and Goku are excited at this.

They continue along, balancing along a log between two cliffs, then tread through the desert, through a river, running away from a tyrannosaurus, and finally they get back home. The boys lie down, exhausted. Kame-Sen’nin says they’ll be delivering milk everyday for the next eight months. 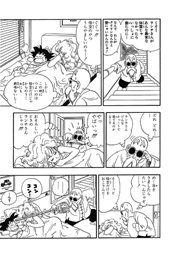 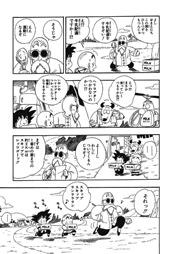 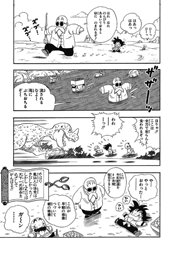