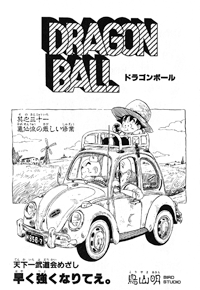 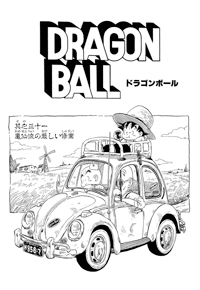 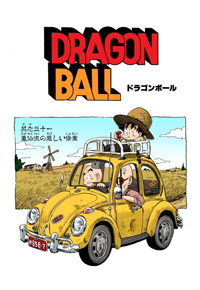 After eating breakfast, Kame-Sen’nin says that they’ll study until lunch. Good martial artists train their minds as well as their bodies. Goku hates this, but Kuririn thinks he’ll surely win at this one. They start with language, and Kame-Sen’nin tells Goku to read from page twelve. It’s now 12:30, and the three of them are lying in hammocks, taking a nap until 1:30. We’re told that “Moving well, learning well, having fun, eating well, resting well; this is the Kame-sen Style’s training.”

Goku and Kuririn take off their clothes, and Kame-Sen’nin tells them to swim back and forth ten times. He warns them that there’s a shark in the lake, but not until after they’re already being chased. They finally get out, and Kame-Sen’nin says they’ll move on to the next part. He ties the boys to a tree, and tells them they’ll have to dodge their foe’s attack. Kame-Sen’nin creeps over and whacks a beehive with his staff, and Kuririn and Goku try running away, but they can’t because they’re tied to the tree. Kame-Sen’nin says that today’s training is finished, but starting tomorrow, they’ll have to wear these 20 kilogram turtle shells on their backs. 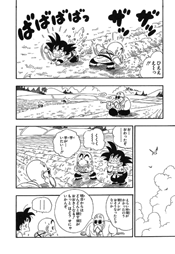 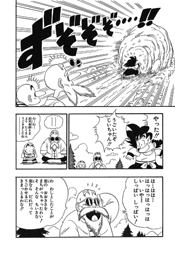 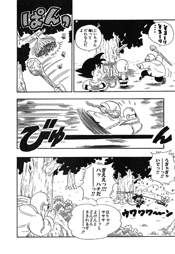