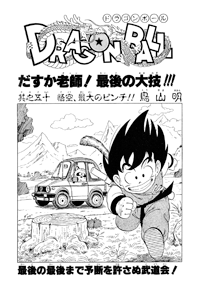 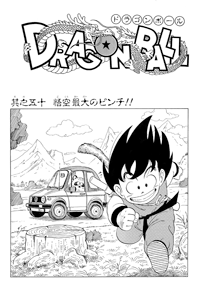 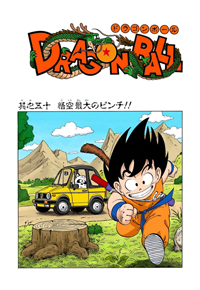 It’s getting late, and the sun is setting. Goku and Jackie stare at each other, while Yamcha and Kuririn cheer Goku on. Jackie begins to think about using a technique to finish the match, but he notes that it could kill Goku. Jackie then leaves his fighting stance, and tells Goku that he’s going to lose this contest. Goku asks how, but Jackie is already rolling up his sleeves and says he’s only used this technique on one other person, so Goku will be the second. “The first was Son Gohan, or rather, your grandpa…” Goku’s surprised to hear that he had fought with Grandpa.

Jackie puts his hands together, stands with his feet apart, and starts charging up. Jackie then pulls his hands apart, and they start flashing. He points his hands at Goku, announcing his Bankoku-Bikkuri-Shō. Jackie shoots out lightning from his charged up palms, and Goku is caught in the huge stream. Goku is lifted into mid-air in the stream, screaming as he’s being electrocuted. Jackie yells up at him to concede, but Goku just sticks out his tongue. Yamcha and Kuririn also tell him he should give up. And then, just as Goku starts to concede, he gets a look in his eyes… The full moon is out, and Goku has another Ōzaru transformation. Yamcha is scared, while Jackie and Kuririn are simply bug-eyed with amazement. 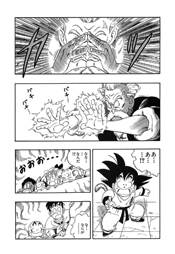 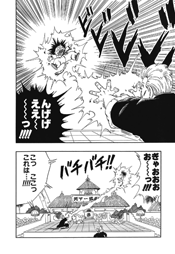 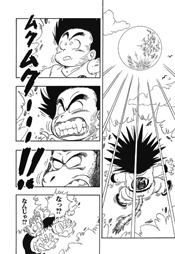