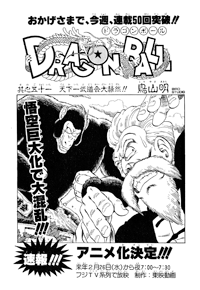 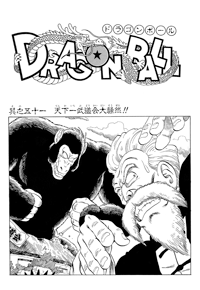 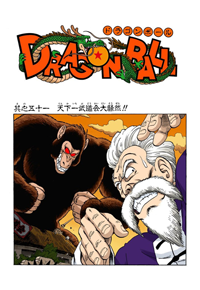 Chaos Reigns at the Tenka’ichi Budōkai

The announcer can’t believe what is going on and informs everyone that Goku has turned into a giant monkey! Jackie freaks out, since Goku has broken free of his Bankoku-Bikkuri-Shō. Goku starts smashing up the backstage hall, and grabs a chunk of the roof, tossing it aside as people run away screaming. The announcer says he can’t run away because of his position, and Jackie says it’s worse for him, since running away would be a ring out. Goku continues to smash up the building and Kuririn yells at him to stop this dangerous technique and return to normal. But Kuririn just gets a chunk of wall thrown at him. Yamcha explains that it’s not a technique; Goku turns into a monster when he sees the full moon. Jackie overhears that, and realizes there’s only one way to settle this.

Jackie just barely avoids getting squashed by Goku’s giant foot, and then he tosses his jacket aside. Yamcha yells at Pu’er to turn into a katana and cut off Goku’s tail. Oolong points Yamcha over toward the old man, and Jackie’s all buffed up like he was at Mount Frypan. He looks up towards Goku and announces his Kamehameha Max Power. Yamcha yells to hold it, but it’s too late, and Jackie fires a huge Kamehameha at Goku. There’s an explosion, and when the smoke clears Kuririn can’t believe it… “Goku’s dead!!!” 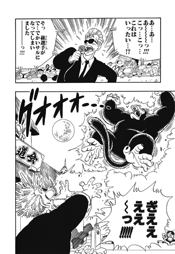 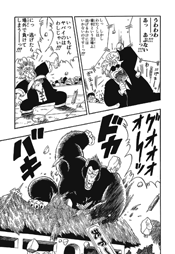 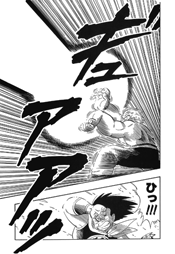