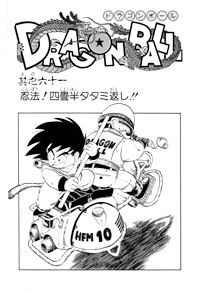 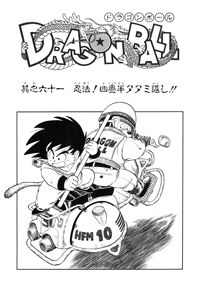 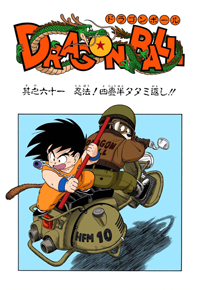 White yells at Murasaki over the PA system, so Murasaki decides to get serious. He pulls out his katana (sword), and tells Goku he’s going to die. Murasaki jumps up into the air to attack Goku, but Goku plants the Nyoi-Bō in the ground so it’s sticking up and backs away. Murasaki lands on Nyoi-Bō, which goes up his ass as he comes down. Murasaki runs around screaming, and Goku laughs, saying that he has a tail now too. Goku finally pulls it out and Murasaki clutches his ass while Goku laughs some more.

Infuriated, Murasaki grabs his katana and swings at Goku, but he blocks it with Nyoi-Bō. Goku starts coming at Murasaki, who just barely holds off the Nyoi-Bō with his katana. Until Goku takes one hard swipe down and breaks the blade off the katana. Goku says it’s no match for his Nyoi-Bō. Murasaki throws his broken katana down and suggests they fight with bare hands. Goku puts Nyoi-Bō away, and Murasaki throws a curved blade at him, but Goku jumps over it. Goku says he’s dirty for lying, but Murasaki insists this is a game of life-or-death. Then the blade comes back and hits Goku in the back of the head, knocking him out, and Murasaki calls it his Boomerang Shuriken.

Murasaki celebrates his victory while White compliments him over the PA system, until Goku starts to get back up. Goku says his head really hurts now, and Murasaki can’t believe it. Goku, now very angry, starts chasing him, and so Murasaki throws some shuriken back at him. But they hit the tree Goku ducked behind, and he pulls them all out so he can return them, as Murasaki runs into the house. Goku comes in after him, and prepares to throw the shuriken as Murasaki kneels confidently over the tatami floor mats. Goku throws one, and Murasaki catches it with one of the tatami mats. This is his Ninpō Tatami Gaeshi (Ninja Arts Tatami Counter). Two, three, four, and a fifth shuriken caught with a half-size tatami, then Murasaki laughs. But there are no more tatami, and so Goku throws his sixth shuriken right into Murasaki’s forehead. Murasaki says it would’ve been better if he’d had six whole ones instead of four and a half. 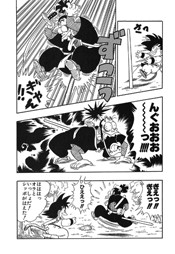 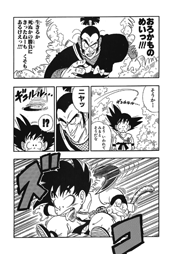 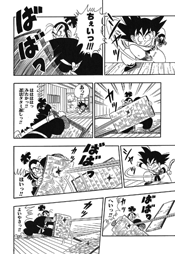