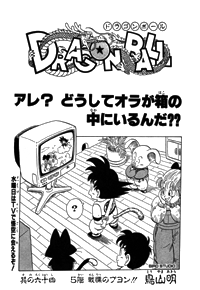 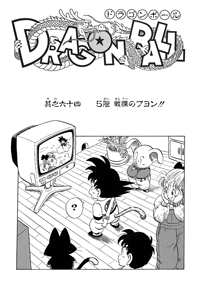 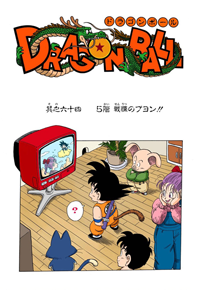 Goku lands safe on his feet, and then Hatchan falls down on top of him. They both realize this is the mysterious room on the fifth floor, and White looks down from the trap door and laughs at them. He says to give up the Dragon Ball and the radar if they want out of there, but Goku refuses. So, the trap door closes, and White says he’ll watch them die through the monitor. Hatchan asks Songoku (he always says it like a single word) if he’s also gathering the Dragon Balls for bad stuff, and Goku explains about Grandpa’s memento. Hatchan’s glad to hear that.

A wall opens up in the room, revealing a huge, fat, drooling, blobby monster. White announces that this monster, Buyon, is going to eat them, and Hatchan is scared. Goku figures he can beat this guy in one hit, though White insists that nothing can affect Buyon. Buyon swipes his huge tail at Goku, but Goku jumps over it, then kicks off the wall and flies at Buyon with a punch to the face. But Buyon is all rubbery, and Goku’s fist gets stuck in his face, then plops out, and Goku bounces back to the floor. Goku can’t believe his punch was ineffective, so he tries a kick this time. But Goku just bounces off of Buyon’s stomach face first into the wall.

Goku doesn’t know what to do, and then Buyon shoots some lightning out of his antennae, shocking Goku. Buyon then rolls out his long monster tongue, grabs Goku with the tip, and rolls his tongue back into his mouth to inhale Goku. But Goku manages to pry open Buyon’s mouth and hop out. Hatchan’s very happy to see him safe. Buyon tries shocking Goku again, but misses. Goku’s worried, since he doesn’t know how to beat him. He decides to try a Kamehameha, but it just bounces off Buyon’s stomach and Goku’s really at a loss now. 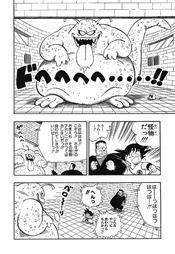 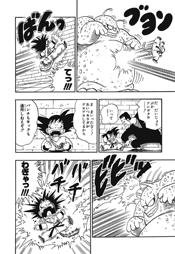 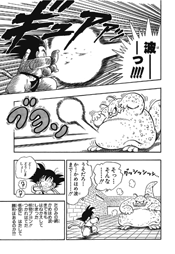