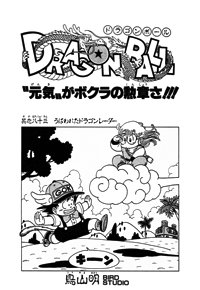 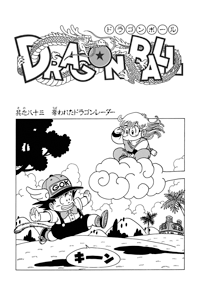 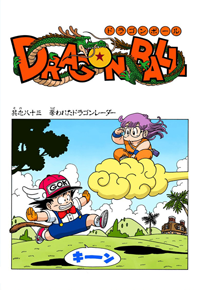 Senbe continues working on the radar, worrying about his genius position, and with a little magical help from Turbo, it’s finished. Meanwhile, Blue makes his way to the house, and spots the plane. But the brat is there too. Senbe returns the fixed Dragon Radar to Goku, and he’s very happy, but thinks it odd that it says the three Dragon Balls are right here. Then Blue runs in and grabs Arale and puts a knife to her head. Everyone’s confused, but Goku’s furious, and wants his Dragon Balls back.

Blue’s eyes flash, and Goku can’t move again. Turbo recognizes the Chōnōryoku, and the wife asks Goku if this is a friend, but he says he’s a bad guy. Then Blue notices the radar, and snatches it from Goku’s hand. He’s going to take this plane, too. Blue hasn’t forgotten about Goku, though, and he tosses the bag with the Dragon Balls in the plane, and says he’s going to kill him. First he whacks Goku in the back of the head really hard, and then chops down a palm tree with his hand. He stands over Goku with it, and says he will make a shish kebab with him.

Senbe yells for Arale to get this dude with her Pro Wrestling moves, and she runs in and gets him in the back with an “Arale Kick” and sends him flying with a headbutt to the gut. She runs after Blue, or rather, ahead of him, and then jumps up and headbutts him off into the distance. Goku can move again, and then Arale comes back. She tells Goku she beat him up, and he’s very impressed. Arale tells him that Gatchan is also strong, and so is her friend Obotchaman. Goku thinks he’ll have to train more and more with all these strong people in the world.

Then Goku finds the bag with the Dragon Balls in the plane, but the Dragon Radar was in Blue’s pocket. Goku’s very disappointed, thinking that Bulma will have to make another one, but then Turbo says he’ll make one. He asks Father if he can use some parts from the plane, and Senbe wonders if Turbo can make another one. Turbo says he remembers how from watching, and then magically takes the parts from the plane and makes a new one instantly. “Awesome!! Thanks!!!” Senbe’s not surprised his kid would be a genius. Goku calls for Kinto-Un, and thanks everyone. He tells Arale she should participate in the next Tenka’ichi Budōkai.

Goku leaves and they all wave goodbye, and Senbe wonders about that kid. Blue, meanwhile, is in a phone booth, and he tells the person on the other end he managed to get the enemy’s radar. The person tells him to hurry back to headquarters, but Blue says it’s not that simple. He’s out in a desert, with pyramids and telephone poles… 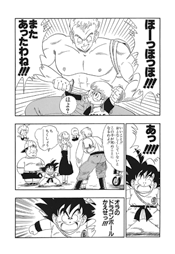 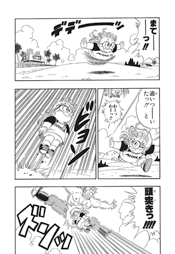 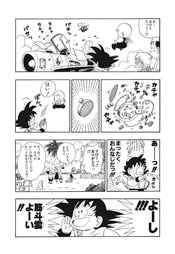